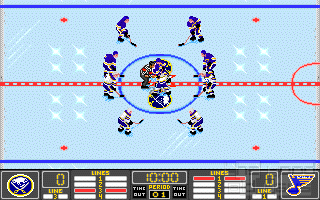 In 1993 NHL Hockey started off the famous NHL-Series which has seen a new version almost every following year. They all offer great gameplay, the original teams and players of the NHL and great graphics and sound. From the starting menu you can choose whether you want to play an exhibition game, a season or a playoff round or have a look at the various statistics. There you can view the real 1992/93 stats or the ones of your season. The 1992/93 season which is represented in the game saw just 20 teams compete for the Stanley Cup, divided into four divisions. You can select to re-play the actual schedule or create a random one. You can also set up the rules to your likings. For example you could select no offside or no penalties and of course the length of a period. Up to 20 human players can take over the teams, either on the same PC or by transferring game data on disks. When you have chosen a team you can start your first game.

But before you should have a look at the line-up. Four offensive lines and three defensive lines are at your disposal. Each team also has its special teams for powerplay and penalty killing. To know which players are best suited for each position they have several values. By comparing speed, shot power, checking and many more you'll surely be able to set up your team most efficiently.

You watch the game from an almost top-down perspective. A star marks the player you're in control of at the moment. To make player movement more realistic some kind of inertia has been added which means that you can't turn right at the spot but you must first reduce your forward motion to be able to turn around. This is quite disturbing at the start but after some time you'll get used to it. During the match you can change your lines and line-up, change the goalie or even substitute him with a sixth field player in case you're behind one goal just short of the end of the game. There's no way of selecting any specific tactics - the players follow their own routines. And they are doing it not overly smart; it's quite easy to dash through the whole opponent's team with one player and score a goal against goalies who sometimes react quite oddly. But this applies to your team as well which balances it out a bit. What the computer players are quite good in is blocking shots. Injuries can occur during the game and can last for one period or even the whole game.

There's just one difficulty level and during the season it's quite easy to win many of the games. But in the playoffs the computer teams act much more aggressively and are worthy opponents.

Nevertheless NHL Hockey has some weakpoints which slightly spoil the fun. A real career mode is missing because players don't get older and the drafting system is completely missing, injuries don't have long term effects, the trading system is questionable and some statistics aren't properly recorded.

But it's still a great game and true classic and absolutely worth a look or two. 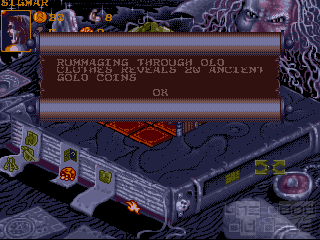