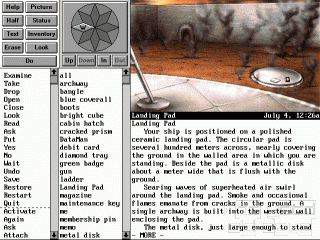 Aeons ago, a technologically advanced alien race called the 'Heechee' had already mastered the secret of faster than light spacetravel. They explored several planets and constructed space stations. Then, they just disappeared.

Now, in the near future from our present, the humans have discovered one of these spacestations. It's crammed full of alien technology, most of which is still incomprehensible to earth's scientists after years of studying it. The most important discovery is the shipyard, though. Hundreds of Heechee ships ready for takeoff!

Of course, there are enough brave souls who can't wait to use this opportunity. They're transfered to the station which is now refered to as 'Gateway', go through a brief training as 'prospectors' and then they set out to find their fortune.

So much for the theory. Reality is a lot tougher, of course. Nobody has been able to decypher and reproduce the way the Heechee programmed their navigational computers, yet. So all scout missions basically go into random directions. It could lead to a planet full of valuable relics, but also directly into a black hole.

Gateway is done in classic Legend Entertainment style. That means you have the choice between a point & click interface combining long lists of general and situation-specific verbs with a small graphical window showing the current location and pure typing interface. The latter is way more efficient, of course, but younger gamers will probably prefer the more 'modern' approach. Either way works fine.

The player takes the role of one of these adventurers described above, of course. Fiddling with alien technology has always been a welcome subject in this genre. It opens up endless possibilities for tricky puzzles. Gateway actually succeeds well in applying this basic idea, at least partly. In the course of the game, it strays away from this more and more often. Instead of impressively complex and mystic machinery, especially the middle part of the game feels more like one of the classic treasure hunt text adventures. While that's not bad per se, it doesn't fit in too well here.

Same goes for the story. The tale of a forgotten civilization isn't new (and it also wasn't when the books this game is based on were written), but it always offers lots of potential. The following discoveries in the first third of the game move everything along very well. After that, nothing really happens anymore until the one-line conclusion which only spells out what we've already suspected anyway, though, giving the overall story a one-dimensional feeling (play the game and you'll know what I mean).

On the whole, Gateway is a mixed bag in both story and puzzles. There are no parts which are bad or even below average, but for example compared to the great scenes based in 'virtual reality' where the puzzle quality really shines, the exploration of a few of the planets the protagonist visits falls short. Either plot development or better puzzles would have been enough in these intermediate scenes, but the game provides us with neither. A missed opportunity, but a worthwhile waste of time. 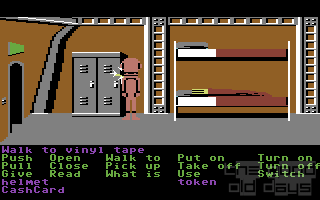