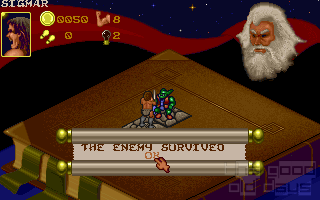 However, the game was not flawless. There were quite a few problems, which, while not making the game impossible, increased its frustration factor. Probably the biggest problem was searching for treasure. Each hit point (called “body point” in this game) counted, and healing potions became more important than anything else. This changed a typical level that lasted 20 to 50 turns to something three times as long. In addition, the story was quite choppy, and sometimes understanding the reasons behind the quests was quite a task. Lastly, there was a bug that made cheating quite easy in some instances: the board was divided into numerous sectors to fit the screen. If you stood at the edge of a sector and a monster was standing next to you in the next sector, you could hack away at that monster, but you would never be attacked.