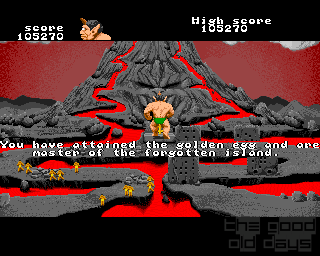 Regardless of what kind of game it is and how good or bad it is, this game wins the price for the greatest game name ever hands down: Aaargh! Just imagine going to the games store and demanding Aaargh! Or phoning a game retailer to order it. The possibilities of cool situations are endless.

It helps that Aaargh! does have a freaky theme: Two giant monsters (both are as huge as buildings), one a green dragon and the other a cyclops, are competing for the ultimate rule over the 'forgotten island'. Apart from these two, there are a few cities on the island which are inhabited by humans. Humans living in mortal fear of these monsters which presumably terrorize them constantly.

Now, to become supreme ruler of the island, you have to get a golden egg. To get this egg, you first has to collect at least five 'normal' (i.e. non-golden) giant eggs. These eggs are hidden in the cities. Bad luck for the humans - why did they hide these prized possessions in their homes anyway? They really should have seen it coming. This all makes only little sense, but who cares?

So, the two competitors are entering the cities to get the eggs. Gods don't just ask the insects living there for something, of course, so they just smash buildings until they find the respective egg and then take it from the inhabitants. The villagers don't really like that idea, so they're trying to defend themselves with a catapult hurling rocks at you until you're either dead or you've smashed this weapon. The other danger is giant insects (actual insects this time, not just a figure of speech) flying around, trying to kill you, too.

Whenever you attack a building either with your powerful fists or your fire breath (both monsters have the same abilities), the people living in there run into the open in panic (surprise, surprise). After a few punches, the building crumbles, revealing what's in it. Apart from eggs, this can also be different kinds of food (a giant slice of pizza, a giant hotdog,...) which you can eat to renew your energy. Alternatively, the villagers themselves can also serve as little snacks.

Once you hold a village's egg in your hands, you're challenged for this possession by the other monster. In a one-to-one brawl, you have to defend your prize by knocking your opponent out. Once you've collected five eggs, you automatically enter the final level in which you can get the golden egg.

Aaargh! plays surprisingly well. The visual presentation of the different cities is well done (although one has to wonder why there are so many different cultures on this lonely island), and smashing them to pulp is fun. The controls are sometimes not reacting quite as they should, but this only rarely turns out to be fatal. The idea of giant pieces of food lying around is a little too silly, though. Especially since there is absolutely no point to it: The villagers alone could have served as food - that fits way better with the whole theme anyway.

Unfortunately, the second part of the game, the recurring fight with the other monster, isn't nearly as well done. Nobody expects a masterpiece like IK+ for this stage, but the way it is, it's more in the line of the later Rise of the Robots: You can win this stage just by using the same move again and again, and it's not even hard to figure out which one. Disappointing.

Difficulty is the game's biggest drawback anyway. Even the giant insects aren't much of a threat in the village levels, and so you can finish this game easily in one of the first tries. Interestingly enough, the game just begins from the start again after finishing it automatically, but it's still exactly the same then. At least, they could have increased the difficulty by throwing in a few more dangers then.

Total lack of challenge and a painfully missing two-player-option reduce the excellent first impression to fair one. Certainly a very good waste of time for a short time, especially when it was new - considering that this game came out for the Amiga a year before Rampage (the actual original 'monster smashing everything' game in the arcades) was ported...

Wandrell:
The PC version does have a two players mode, but I barely played to it.
[Reply]