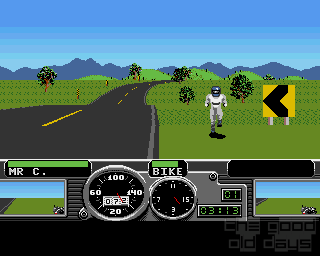 Road Rash - one of the few signature games of the Sega Mega Drive (apart from Sonic, of course). The Amiga and the Mega Drive had quite a few things in common hardware-wise, so porting this successful hit was only a question of time. A year after the original release, it finally appeared.

You and your motorbike are taking part in races. Not your usual races round and round a course, mind you, but races along normal roads. Illegal, of course. This means you don't just have to avoid the usual water, sand and ice spots, but also all kinds of vehicles driving along peacefully and minding their own business. Still not enough, the conditions are even tougher. Virtually everything is allowed, including hitting or kicking your opponents off their bikes (and they may do the same to you, of course). Even simple (yet effective) weapons like truncheons or chains can be used.

Fortunately, none of this is fatal. The drivers even survive a full frontal crash with a car falling off their bikes and flying through the air for a long, long time. They'll just get up again, run back to their bikes and drive on. Unless one of two 'race over' events occurs: First, the bike can be smashed. Second, you can get busted by the cops. If you commit some sort of offense under the watchful eyes of a policeman, and then fall off, he'll arrest and fine you.

The game usually still goes on after these, unless you run out of money. You gain money by winning races, and you spend it for repairs, fines and for new bikes. You can buy different ones out of three different categories, and this actually makes a difference. Also, it's great that there isn't really the 'ultimate' bike: The light and fast ones are difficult to handle, the heavy ones are great for straight courses, but suck in curves and so on.

There also isn't the necessity to get placed high in each and every race. Even if you become last, the game continues (provided you're not broke, as described above). To reach a higher league with longer and more difficult courses, you have to be good, of course, but you have an infinite number of tries.

Pretty much everything has been done right in Road Rash. It's fair, it's fun. Even though the actual 'fighting' with other drivers doesn't occur as most people who haven't played the game seem to think, it turns out the game doesn't need it to be fun! The courses are good (especially going up and down - including small jumps - is fun). Minor complaint: the different 'categories' of courses aren't all that different. It's always a two-lane road through the open country, just with different background graphics. Graphically, it's excellent as well. A typical complaint I have about many racing games of that time is that the animation is choppy. Sometimes, it even looks as if the car is moving backwards. None of this is the case in Road Rash. It's fast and very fluid. So there isn't really anything to complain about. A classic! 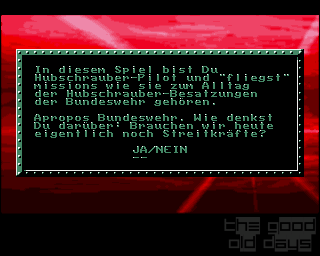