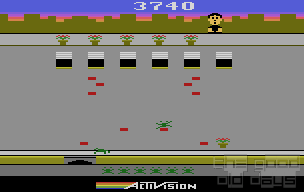 Evil mutant spiders are invading your house. These monsters are crawling up the wall, trying to enter by the windows. You're the world's last chance, and the weapon of choice is, of course, potted petunias. You throw them down, trying to hit the uglies before they reach the windows. Now, if only everyone's favourite award-winning actor William 'Captain Kirk' Shatner had thought of that in the philosophically subtle and thoughtful Kingdom of the Spiders...

Depending on the level, the spiders go slower or faster, crawling back and forth (left and right) depending on their colour, so you have to time your purely vertical throws accordingly to still hit them. If too many spiders per wave manage to enter the building, an extremely powerful building-eating bug emerges from the sewers, awards some medals to his successful troops, taunts you, and gnaws away a whole level of stones and thus making the game even harder from now on.

Crackpots is an extremely simple (but not easy) game. Move left and right on the top of the screen (one degree of freedom - everybody can handle that), to the spot you consider the right one after analyzing the current situation in detail and push the fire button to rain down death on the invading hordes. You have unlimited pot ammo, the six spots even being refilled immediately and automatically. Nice and fast game, but you will get the strong impression to have seen it all after a few minutes.

How is this game special and worth talking about? Its speciality is being common even in the common crowd: A very typical game for the Atari VCS era. Most games were very much like this: single screen, gameplay limited to one basic activity, success depending on skill and reaction times. Still, these kinds of games provided seemingly endless fun. And seeing how people are constantly playing games which come with operating systems all the time, not much has changed. 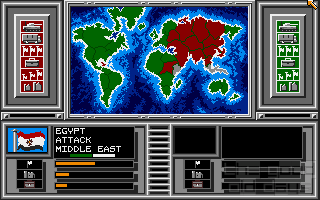