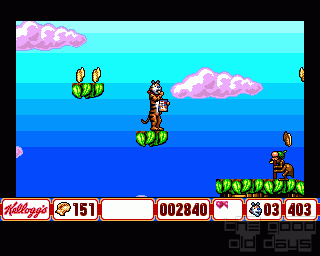 Kellogg's trying to convince you to eat more breakfast cereal. Not just any, but their own, of course. Also, not their boring old corn flakes, but the variants with as much sugar as possible (still extremely healthy, of course). The tiger from the Frosties, the monkey from the Coco Pops, the toucan from the Fruit Loops and the frog (?) from the Smacks can all be controlled in this by-the-book Jump'n'Run game.

At fixed points in the levels, there are special doors which, if opened, reveal the character selection screen. The changes aren't purely cosmetic, but each mascot has different abilities. Those are pretty obvious: If a section with lots of water lies ahead of you, the frog (who can swim and dive) might be better suited than the tiger (who can neither swim nor dive).

Graphics and animation are good, the game is longer than most promotional games, and it's also harder than the average. Of course, compared to your average promotional game again, meaning it's still not hard at all, but whereas most games of this type just let you walk right through them, this one at least provides a bit of a challenge.

What about advertising? You play as the mascots of the company (and another one - the bear - whose product escapes me at the moment, appears giving you hints), and instead of Mario-related coins, the characters collect their respective cereal for additional bonus points. If you're not doing anything for a few seconds, the active character will start eating cereals. None of this is anything to complain about.

So what we have here is a very good promotional game. Unfortunately, the magazine cover disk on which this came back in 1994 turned out to be broken. Crashed right after the beginning. Damn. Now's the second chance - highly recommended!