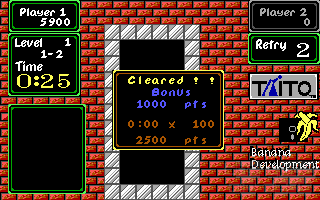 Puzznic is one of the great games from the heyday of the puzzle-genre. The late 1980s/early 1990s brought a good number of these gems and well, here's one I really do like. The concept is fairly simple, which let's you concentrate on the problems the levels bring you. Basically you have to get matching pieces together to let them vanish. You can push them to the left and the right, but cannot lift them up. If you push them over an edge they fall down to the ground. Once all are gone you have completed the level.

Simple as that, but difficult in many cases. While the first problems mainly consist of moving blocking pieces away and back again the higher levels face you with the problem of getting three pieces to vanish at once as there are uneven numbers of pieces of the same type. Also pretty soon the dreaded moving brick enters the stage - I seriously got to hate that thing! I have to admit I'm a bit weak in reacting fast, but you sort of have from time to time. You have to throw pieces on these moving things and down again. I tend to push my pieces too late... But seriously - don't think this game has any serious action-elements. It doesn't - I'm just slow.

So let's get down to the good things and bad things of the game: What I like is the variations of the basic problem that get more difficult with each level, but never seem to be impossible to solve. That's a very important factor for long-time motivation. What is wasted a bit though is the 2 player option. You just play one after another. It's pretty stupid and doesn't add anything new to the game. They could have just let that one away if you ask me.

Elwood (2008-05-04):
I don't really see myself as a regular here I have to admit. I did review a good number of games these days though. The will appear over the next days I guess.
Wandrell (2008-05-04):
Just to say I remember the abandonkeep, used to visit it. Also I'm glad we have someone else helping, as I personally won't have as much free time as I wish until next month.
[Reply] 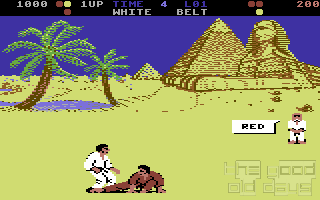