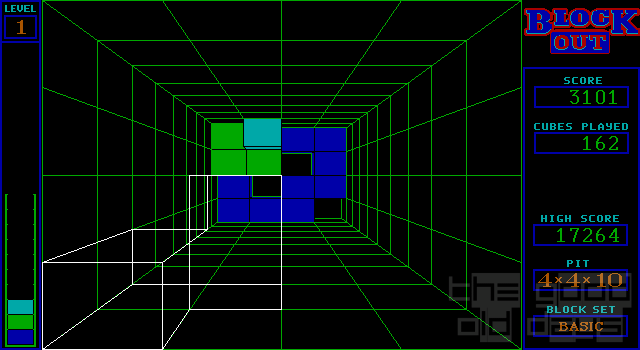 On the one side of the ring you see the longtime fan of Tetris - on the other side you see the game claiming to be the next step in the evolution of Tetris. So... there you have me, the fan, and Blockout, the 3D-variant of Tetris. I won't go into the concept of Tetris now, just in case you have never heard of it, go to the review of Tetris and read up on it. While you're there you should also consider trying that one out first. If you like it, there's a chance you will like Blockout too, if you don't like it - well... it's pretty much guaranteed that you won't like Blockout either. This brings us back to the idea of the ring with the game on one side and me on the other. Playing this game means constant fighting - and that is with the controls of it. But I will get into that later on.

First off, let me introduce you to the game: Just as in Tetris this one is about falling bricks. In this case you do not have to fill lines, but surfaces. The size of the tube in which the bricks are dropping is variable. The easiest variant is the 4x4 tube with a flat tileset. In this setting you get bricks which are not higher than one tile. In this setting the game is quite playable and fun. If you think everything's too easy here just go ahead and try the extended tileset. That one is still playable, but not so much fun - at least in my opinion. In the 3D-mania setting at last the game is completely unplayable and no fun at all.

So... why am I complaining without giving reasons? Pretty simple. I usually only comment on technical problems and the handling of a game at the end of a review. In the case of this game these issues are crucial. While playing the game in 2D there's only one rotation axis. Playing in 3D you have three of those. And that IS a problem. This means you have a key for every axis and every direction (so you can rotate forward and backward). This sums up to six keys for rotating the bricks. Usually this results in random tries - even if you get used to the keys it's still not very comfortable. With the flat tileset this is not so much of a problem, but the more difficult the tileset gets the more confusing and (more important) timeconsuming it can get to rotate them to how you need them. With larger tiles this often is simply impossible to accomplish in the time you have to drop them. Now of course this is part of the game's concept - just as it is in Tetris. But there you get to the point after making some mistakes and building too high. Once you reach the point where you cannot rotate the tiles freely anymore the game is usually over. Well, it's the same here - just that some tiles are so difficult to rotate that this point actually comes just right after the beginning. This makes the most difficult tileset unusable.

Another problem is that some tiles are just hard to see in certain positions. You cannot really make out how they are standing at the moment - and usually you don't have the time to rotate them to look and rotate them back. This also results in some frustrating moments.

Okay, so this sounds like a really really bad game here. This is not right either. The easy version is fun and actually good. If you're really into Blockout you might even enjoy the medium version. So, just take the hard one as a gimmick of some sort. Just don't take it serious.

Rating this game I had to decide between 2 and 3 - and maybe a little bit of 4. The definition of 2 mentions frustration, which definitely can come in in this game - but that's mainly in the difficult tilesets. The game isn't defined by it. So let's look at 3... that's pretty much it. The only thing that bothers me is the thing about there being “nothing special to it”. Well, this isn't the case either: The game tried out something new. So... 4? No, Blockout simply isn't that good in my opinion. I have to stick with a rating of 3. 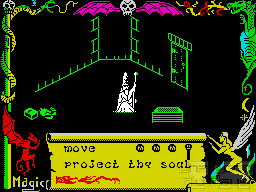