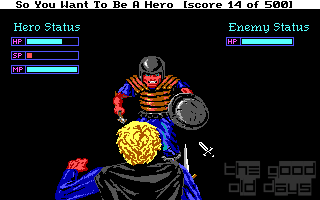 Hero season is on! Having graduated from Famous Adventurer's Correspondence School you pack your stuff and seek the nearest station to exercise your valour and might in pursuit of a new respectful title. A swell opportunity was waiting just around the corner. After a short travel and crossing over the mountain range you wound up in Spielburg Valley - a small area surrounded by woods and in the center of it a fictitious medieval/fantasy german town. And lo! There seems to be plenty of work just for a zealous adventurer like you...

Hero's Quest. A sweet pastime of my carefree adolescence and most favorite installment of mine in the entire Quest for Glory series. And I mean not only the chapter but also the original SCI0 release which is marked out by the name, vintage EGA graphics and last but not the least - text parser. Honestly, without the latter this game loses 50% of its charms, which is why I prefer this over its point'n'click VGA remake. Incidentally, this is the only game in the series bearing the Hero's Quest title. Due to trademark clash with Milton Bradley company and their HeroQuest game Sierra had to give it up and re-release the game as Quest for Glory which also became the title for all subsequent releases including the remake. Only I don't see how Hero's Quest and HeroQuest is the same title.

The game was designed by Corey and Lori Ann Cole, a married couple just like Ken and Roberta Williams, the King and Queen of Sierra. It's very nice to know that some family units can be so well aligned in terms of ideas and aspirations and engage in a teamwork especially when it comes to something as creative as computer games. It's practically an Art. Hero's Quest and the entire Quest for Glory series is primarily known for being an exotic hybrid of 3rd person adventure and RPG with some real-time elements, non-linear script, additional puzzles, witty and humorous punchlines and is by far one of the most successful best-sellers on Sierra's record.

As the game starts you proceed with bulding up your character. There are three classes you can select from: Fighter, Magic User and Thief, where the latter immediately raises questions as to whether he's really fit for any heroic deeds with such ambivalent moral compass. Each one of these can be given extra points and may enjoy the abilities of one another except they still walk different roads and have hidden dominant faculties not displayed in the character's chart. Each one of your skills can be further developed in the game by practice, which is the core RPG element here. So, if you, say, endow a thief with some magical skills, which used to be my personal favorite “cheat”, it will simply be a thief trained in magic, but never a genuine wizard. However, I do vaguely recall going from thief to paladin in Shadows of Darkness on character import from Quest for Glory III, so technically you may still crossbreed to the point of total conversion, but it won't happen fast, mind you, and never in this game. Besides, playing it “clean” is a lot more challenging and fun.

Spielburg (which literally means Playtown) is an incredibly small place and looks more like a refuge camp. There is Sheriff's office, Inn, Magic Shop, Dry Goods store, Tavern and Guild Hall which is where you enlist as a future hero of the town. There are other places here like barber's shop and bakery but those are forever out of order. Here you can rest, stock up on food, weapons, magic spells and other stuff depending on your needs and class. In the mean time you can talk to local folks and collect neccessary information before you venture out of town and explore the woods. You're safe within the town walls unless you ignore sheriff's advice and try “Dragon's Breath”. Bad idea. Also, it's best that you stay out of the dark alley at night unless you're a thief who knows how to deal with his own kind.

Money plays an important role here. You always need food, healing potions and other things which aid you in your quest. You start off with a small sum, but when fully expended you must look for ways of getting more, which is achieved by killing and searching dead monsters, taking a job, providing someone with small service or stealing if you are a thief, which isn't always a good idea as you can do yourself some detriment, like if you steal potions from Healer's house she won't open the door to you next time. So you see, stealing is bad after all, but only if you're not bright enough. If you're bright you rob people's properties at night by applying your lock picking skills masterfully. You also receive bounty for every successfully accomplished mission, so hey, becoming a hero also means getting rich.

Outside the town is where real action happens. There are many places you can go, but whatever path you take lies across the dark forest populated with a variety of human, humanoid and non-humanoid beings mostly malevolent which means frequent hostile encounters are inevitable. Naturally, all your enemies pose different threat, some are quick to defeat while others are quite formidable and shouldn't be underestimated. You can pick up a fight or you may simply evade it and run away. In fact, the latter is more advised for a novice and it's best that you brush up on your combat skills first, which you can do by fighting minor enemies. Be sure, when you toughen up you will start molesting poor monsters small and big ones for money and sport, but until then you must use discretion. Meanwhile you can throw stones, daggers or if you're a magician cast fireballs at your enemies, which also requires either good aiming or magical skills, which are easier to develop with no harm to oneself.

There is a host of other characters here with whom you must interact. Friendly ones offer you information, assistance, exchange or gratitude for kind service, while others are superior foes. Your archnemesis here is Baba Yaga, who is an evil witch from russian folktales and bedtime stories, but before you can challenge her there is a lot you must accomplish.

The game exhibits unusually high for Sierra levels of realism, which is one of its chief attributes. There is day and night time passing in smooth transition. Your character requires rest, sleep, food and training. The game vocabulary is quite rich, dialogs and overal interaction is very flexible. The mapping, design, graphics and music are marvellous. The tasks are also entertaining, creative and manifold, there is a lot of talking, fighting, secrets, puzzles and magic here. Does this game have any misses or drawbacks? My answer is no. I reckon it has more than one could ever dream about in 1989. Perhaps only one thing is missing, which was so much anticipated by many wannabe dragon slayers out there. Sorry, folks, no dragon here. Unless Saurus Rex is what makes up for one.

The best game ever!
Second one is also decent but this is more sandboxy!

I hope i didn't get in the way

This is just one more i ever wanted to nail, the rest is all yours. Then again, don't forget that you can write reviews on top of existent ones

beranmuden:
Nice review, that's one less Sierra game for me to write down...
Moebius:
One of my most beloved classic Sierra adventures. 6 out of 6 unquestionably, as i like it even more than its VGA remake. Absolute treasure.
[Reply] 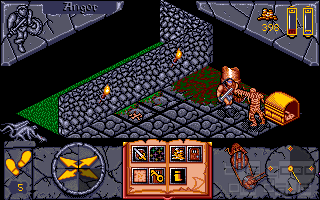