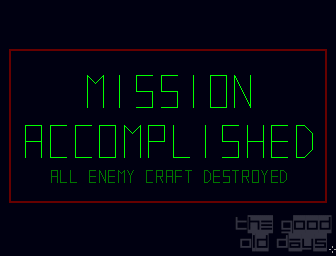 [Mr Creosote] In 1992, the game genres as we still know them today had been pretty much settled already. While in the previous decade, experiments had still been welcomed fairly warmly, professional reviewers, many of whom were employed as 'specialists' for a certain genre, were not as sympathetic anymore when Air Support was released.

[Wandrell] Still, it's a pretty simple mix, not like the weirdness companies such as Coktel or Silmarils would create. Strategy and action, a mix that makes it similar to games such as Campaign.

[Mr Creosote] That's right: Psygnosis try their hand at spicing up the strategy/wargame genre with some three-dimensional action in which the player can take the wheel of one of his vehicles himself.

[Wandrell] Not a bad idea. Actually it would be repeated a few times year later, when 3D games were more developed. This gives a bit of control over what otherwise would be a fully AI controlled battle.

[Mr Creosote] The excuse this game makes is that it is a training simulation for future cadets who are supposed to learn the tricks of the trade. Appropriately, it begins with a couple of simple training missions which are supposed to teach the player the way this game will work.

[Wandrell] The basic controls are simple. You have a map, you have your units and there are enemies hidden all around. Just set waypoints and give orders to your units.

[Mr Creosote] A couple of years later, this would have been called 'real time strategy' as time progresses constantly, whether you're thinking or giving orders. Just very slowly.

[Wandrell] Of course, RTS would become a synonym of “Dune 2 clone”. This game is very different from that one in its looks, but inside it's also an attempt to create an easy to handle strategy game.

[Mr Creosote] The strategic/tactical part is reminiscient of Modem Wars: An abstract-looking map with abstract symbols representing military units. Like in that game, the controls are nevertheless very intuitive.

[Wandrell] Right click to place marks, left click to activate units. Basically that's it, but there is also a variety of options, always visible in the map, to configure the orders to be given.

[Mr Creosote] Each level has got a clear goal, like destroying a particular structure or annihilating an enemy battalion. This can basically already be achieved just on this strategic layer – you can play the game only in this mode and still win.

[Wandrell] That's a nice point in its favor, because to me, the action scenes were confusing and hard to maneuver. Surely it was because I didn't play with a joystick, but still it's good not being forced to get into action scenes when you are looking for strategy. After all, a problem of genre-mixing was getting a game you liked with a game you didn't.

[Mr Creosote] Well, now you're reacting exactly like the close-minded reviewers of th e time. The general point, though, should tell you that the the two parts of the game are not that closely interconnected; the action depends on the strategy, but not the other way around. One could even suspect that the action is just a late add-on of the design process. That part was what seemed to enrage many gaming magazines back in 1992…

[Wandrell] I wouldn't be surprised if the action wasn't originally in the game. Not because that part looks as if they just pasted it, but because the strategy itself feels, in a way, a bit simple for its time.

Back then people were already expecting more “complex” games, and not just having to move symbols around, even if it just meant having extra gimmicks.

You can see it in Panzer General, which a few years later would give a tabletop game, but with animations for the combats and some videos which, even if they didn't add anything, made people feel the game was something more than giving orders around a map.

[Mr Creosote] Well, Nectaris or in the computer world Battle Isle preceeded Air Support (and most definitely Panzer General) in this respect. Although in all those games, the battle scenes are actually just a non-interactive gimmick. Here, they can be played, even while the rest of the battle goes on.

[Wandrell] So the idea is sending your troops, and if things get too ugly, you jump into action and save the day.

[Mr Creosote] The action is presented in wireframe graphics. This makes them pretty fluid and fast, but the style was not exactly current anymore in 1992, of course. That was more common in the days of the original Elite. Again, something which was not appreciated much at the time, but 20 years later, it does not exactly matter anymore.

[Wandrell] Isn't there supposed to be a mode for old 3D glasses? I didn't see the option, though.

[Mr Creosote] Yes, there is (it's called 'stereo'). The effect is actually not unimpressive, at least as well as this colour-based technique can work, but unfortunately, it depends on halving the display frequency; i.e. it flickers badly. That also explains the wire-frame graphics, because it wouldn't have worked otherwise. To be honest, though, unlike the action mode itself, this 3D mode is just a gimmick which distracts the player more than it helps.

[Wandrell] We have talked a lot about the action, but only described the strategy briefly. I must say that I found this part of the game, just as the action, hard to play. Mostly because I didn't get a clear idea of how the game did work in its details. For example, the map seems to be constantly under creation, slowly adding to it what your troops find, such as buildings. But this constant regeneration effect of the map made it harder to me to know what is around.

[Mr Creosote] That's the interesting part, because unlike the action, whose controls are hardly ideal, the strategy part is much more complex than one would first anticipate. A lot of things are constantly going on, route planning via waypoints makes the tactical level deeper than in most games.

[Wandrell] You have land and air units at your service, both always visible both in the map and the side bar, while the enemy, of course, will also have anything it needs to stop you. But the first problem both face is that unit position is hidden, you have to explore the map in search of your targets.

[Mr Creosote] I like the exploration aspect very much, because it's handled in a much more realistic way than what would later become the standard in the 'RTS' genre: It's not just black or white (i.e. visible or not), but simply different shades of certainty depending on how close you are.

[Wandrell] Which means it's important how you move your troops around the map, to keep always the important zones under watch.

[Wandrell] After all this, the game may sound good. But to me it wasn't. Just to start with the interface, at first it's all smooth, but the details don't work for me. It may be silly things, for example sending your tank to kill another tank, and then having it stuck shooting to a carcass, but they surely are nuisances.

Just like how when you order your units to move and attack they keep going away fighting enemies you can't see. Why can't the game first indicate something may be there, and then move the unit to it?

[Mr Creosote] The level of micromanagement of your units if you want to play perfectly is certainly high. A unit will not search for a new target automatically, for example. I see this as simply making long-term planning more important. Which the game interface enables quite well with its command structure consisting of multiple distinct steps the player can define.

[Wandrell] It makes it all much more confusing, feeling that you don't control the units. You could say its feel of disconnection between the player and the game is the problem, because also I think it lacks feedback, like having a more clear briefing, showing a general idea of the troops positions.

[Mr Creosote] Granted, the mission goals could be a bit clearer. On the battlefield, though, what you criticise as being unclear, I would call very realistic. If you sat on an actual 'command console', you would not be able to micromanage everything, even though you would have to. There would be losses simply due to too many things happening at the same time which you cannot all observe and react to in time, or because some sensor information would not be available straight away.

As for the strategy you usually have to apply, it makes sense, too. Before you send your tanks, try to gain air superiority (this is where the game's title comes from) and so on.

[Wandrell] Still, I'm feeling that the game lacks something. They throw you on the battlefield, but expect you to know how to act. In the end, that made the game boring to me.

[Mr Creosote] What bothered me more is the heavy militaristic tone. Usually, war games at least have the decency to pretend they are about 'ending a war' or 'defending oneself', i.e. being 'forced to fight'. Air Support is almost the predecessor of propaganda like America's Army, just without anyone's official blessing. Though admittedly, some of Microprose's flight simulations were not so different in this respect.

[Mr Creosote] Well, it was mostly the surprise to find this in a British game as opposed to an American one. Anyway, it was not so bad that concentrating on the gameplay became impossible.

[Wandrell] Some of this game's ideas are good, but the sum of them is awkward. I suppose that's why it got relegated to such obscurity, but still it's, at least, a curiousity.

[Mr Creosote] I think the strategic part is really very good. It all seems very easy to play, but without being shallow. Actually, it draws you into some depth which you won't even recognise immediately without the need of adding features which feel forced.

The action scenes are a nice add-on. They are not quite as playable, but they work well enough and they enable the player to either take over important, decisive micro battles himself, or just blow off some steam. It's particularly useful, because too many strategy games will just let the player watch his plans unfold after an initial, intense planning. Air Support gives he player something to do in the later phase.

Admittedly, the integration of the two parts of the game is not quite as close as in, for example, Midwinter. It's much more abstract, like a board game, but doing it in a way no board game could ever have done.

[Wandrell] So each one has his own opinion. As usual, there is only one way to find out who is closer to your tastes: Give the game a try, as any attempt at innovation is worth of at least one chance. 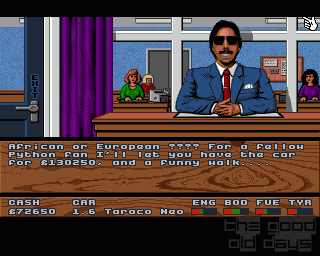