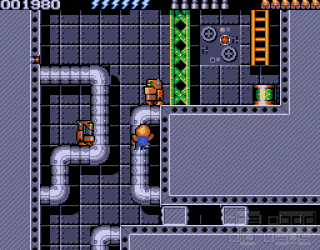 Another ordinary action game. But what makes it special to me is the fact that I spent days, weeks and month in front of my Amiga playing this particular game. Why? Well, to be honest mainly because it was available. I simply didn't have that many games back then. But beside the emotional component, there are also objective arguments for this game.

There are only five levels in this game but those are all pretty long. The first four levels can be chosen from the main menu, but the fifth and final one can only be reached by completing all the others in order before.

Each level has a unique theme. The first one takes place in Hyde Park, London, where aliens have just built up a command centre to control the invasion of the earth from here. After you've wiped out the invasion forces, you grab a UFO to fly straight to the alien's homeworld. You crash on an ice planet though. Escaping this is the second level. The teleporter there also didn't exactly work and you are accidently beamed to a large forest (level 3). From there you get to the 'Fat Guy's' (the alien's boss) 'Atomic Mud Mines' (level 4) where you find the entry to the Fat Guy's headquarters (level 5).

The basic concept is always the same though: Find your way through the level by shooting enemies and blowing up rocks lying in your way. Lives, shots and bombs are all limited but there are of course refills. The levels aren't just laid out horizontally, but at least two dimensions were used. The third level is even a small maze.

Rick Dangerous 2 has a certain feeling to it which only few games have. Fair level design, a variety of enemies, different settings and good graphics and sound do the rest...