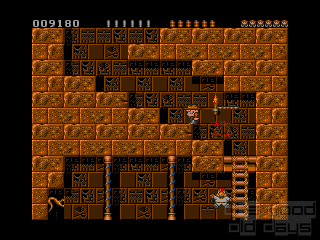 The Indiana Jones action games by Lucasfilm aren't too popular for a reason: they're not very good. Real men are looking for alternatives - and a smart company provides one: Rick Dangerous.

His first mission leads him to South America where he wants to find the lost Goolu temple. Unfortunately, his rival is on his heels. After a fight in mid-air, Rick's plane crashes somewhere over the jungle. The evil guy of course allies himself with the naive natives, and together, they give our hero a good run. Finally, he finds the entrance to the temple and... triggers a familiar trap: a giant stone is rolling towards him (enough of the similarities?). The game begins.

Rick Dangerous is a classic 'running and shooting' game. Utilizing your fast reflexes, you control the 'Rick' sprite with your joystick, trying to avoid traps (of which there are many), shooting aggressive antagonists and blasting up rubble obstructing the way with bombs.

After the initial level, there are three more: Egyptian pyramids, from which Rick has to retrieve the Jewel of Ankhel, Castle Schwarzendump where the nazis are holding British soldiers prisoner and finally the nazi's secret missile base.

Each level consists of several 'pictures'. These are usually several screens long vertically. If Rick dies, he's put back to the beginning of the current picture (provided he still has a life, of course). That's relatively fair in theory.

The problem with this gets especially apparant in the later levels: everything has to be learned by trial and error (to know where the hidden traps are), and even then, there are too many scenes remaining which are plain unfair. Cumulate a few of those in a line, and you have a virtually impossible 'picture'.

Other than that, the levels are designed very well. Good graphics, sound and controls are there, too. That all makes Rick Dangerous still a worthwhile game on the whole. Buying it is mandatory for the sake of the excellent little comicbook anyway 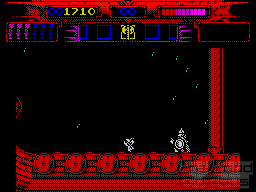