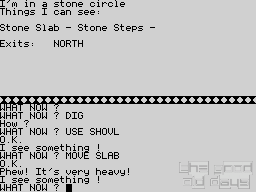 Brian Howarth was a force to be reckoned with in the early days of the text adventure genre. Thanks to his deal with Adventure International's king of adventures, Scott Adams, his Mysterious Adventures were everywhere. The series covered a broad range of themes, from fantasy in the style of the first genre classics to murder mysteries, science fiction and horror pieces.

Though gameplay-wise, all of these games interestingly enough boiled down to the same repeated activity: collecting treasure items. The (usually extremely brief) initial setting was quickly forgotten between fairly blandly described, generic locations and whether you collected golden statues or items from greek mythology did not really create the spirit it was probably supposed to.

Feasibility Experiment stands out in this respect. Its secret formula: It does not even try to tell a coherent story. Instead, the game mixes motifs of various genres into a surreal setting. Disembodied voices, represented by weird, colourful geometric shapes, are whispering to the player about an unspecified impending doom… which only he can avert by – surprise, surprise, collecting various treasure items hidden in all corners of the game world. As incoherent as a world in which you have an ice vault and an ancient stone circle next to a village which is next to an arena which is close to a castle which is close to a chasm with a dragon's cave might be. Oh, and talking of dragons, there are ferocious enemies taken from ancient Roman times (gladiators, lions) as well as fantasy genre clichés (the dragon) who disappear into thin air when attacked with the right weapon!

This is where Howarth could always score: Balancing the tasks of discovering hidden objects and locations, avoiding dangers and enemies, managing inventory as well as exploring mazes and dark caves while preventing things from becoming all too linear. This is done by interweaving the tasks, i.e. creating dependencies between activities. So you'll be running around the locations quite a bit (requiring you to cross the unavoidable maze a number of times); don't count on each place to only be visited once.

One thing, though, remains problematic, and that is the location textual descriptions being replaced with static illustrations. Not only are these images sometimes hardly recognisable (i.e. they do not really replace a textual description) and always painfully slow-loading, but it's actually not possible to play the game without turning them off simply because they take up the same space otherwise used to list the visible objects.

Of course, these are problems coming from the Scott Adams engine rather than this specific game. Which should simply illustrate that this is a game for traditionalists. A good one at that, but it does make no attempt to escape even a single of these traditions. You know what you'll get. 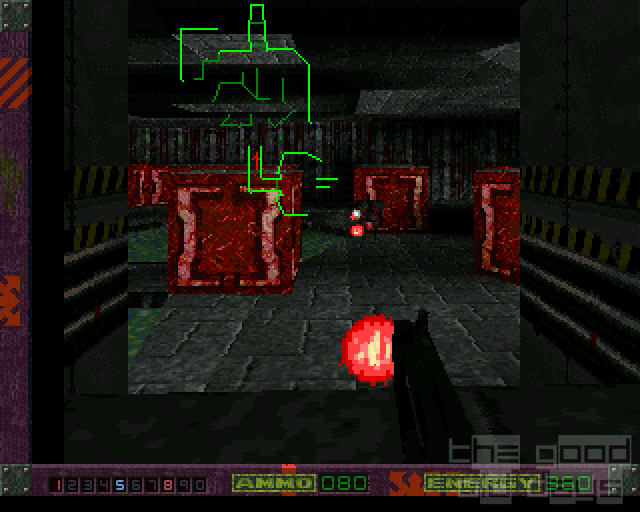