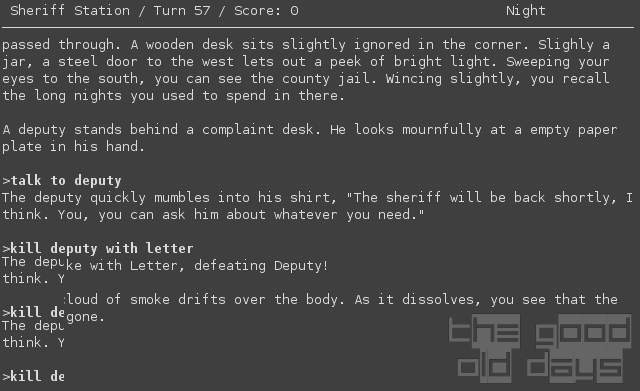 A phone call – some friend tells me about gems which can be found in your home town. Arriving there, everything seems to be deserted or destroyed. The only character I meet is the sheriff's deputy whom I clobber to death with a letter. His body disappears. Leaving the police station, the same deputy arrests me (though not because of murdering him). I break out of prison, because the idiot has left the cell's key lying around inside. He's still dead. I find a gem which magically transports me to another location. I meet a swordsman who attacks me. Of course, I defend myself with my deadly letter, but I fail. I wake up again in a temple of Poseidon...

Treasure hunts are a perfectly viable genre. Just in every genre, there are good and bad games. Luster, unfortunately, falls into the latter category. Apart from being completely disjointed (see above), it is very close to being technically broken, has got many parsing issues and problematic writing.

For example, there is a locked door and a doormat. Looking under the doormat reveals nothing. Examining it reveals a key under the doormat. Things like this make every player cranky. Another thing which makes playing unnecessarily hard is the location descriptions, more specifically the exit listings. Sometimes, they are missing completely. Sometimes, they are plainly wrong. Quite often, they are neither, but misleading and hard to grasp quickly:


Quote:
Sheriff Station Entrance
The entrance to the county sheriff department. You can hear the faint creak of the wood. To the north you can see a dirt road meandering to the east and west.
Where can you go from here? North and “in”. Oh, you thought east and west? Read again. Or take this one:

Quote:
Ramen Booth
You stand outside the ramen booth. Just standing here brings back the memories of wolfing down bowls of ramen. That is until your sodium intake went through the roof. To the northwest, you can see a winding path.

The rest of the implementation is approximately on par with this. You find a room full or coloured buttons, none of which can be pressed and so on and so forth. It seems like there is an intended order in some things should be done, but this is not enforced, leading to strange and borderline incomprehensible occurences. No, it's not the idea of this one which is off-putting, but the execution. 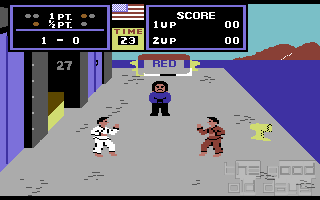