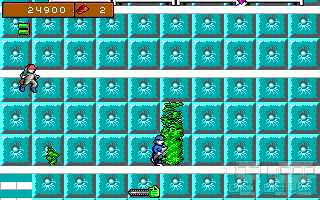 1993, in the same year, Softdisk released a sequel, which was called «Dave Goes Nutz!». Overall, the game was a head shorter than at least the previous part. The game takes place in the crazy hospital, where the main villain is a Doctor Nemesis; he did not want to accept defeat and again kidnapped the younger brother of Dave and hid him somewhere in the maze of the crazy hospital. Dave has no choice – it's his little brother, you need to save him!

The game also added new enemies, except we all knew dogs – in the levels you will find: crazy hospital staff – doctors and nurses zombies with syringes; guards with rifles, shooting poison gas; patients on couches, which, unlike the hunchbacks, throw 2 or even 3 knives; and then this enemy who throws knives from the toilet.

(spoiler) At the exit of many levels there are security guards on duty. To pass these levels, it is necessary to pick up syringes with “hypnotic” to lull the guards. But on one level the syringe is in a place that you think: “Well? how you can get to this place?” At this point, the game, though, scoffs at us: “Behold, this one syringe – see?” I will not torment you long – to pass this level you need to find a secret door in the closet which is just the same and leads to a secret treasure room with a syringe.

The level design got worse – we are constantly bombarded with some mazes of which to find a solution is not so easy, and in one level you need rely on intuition and find a way out of what is called random, and even after several passages, you are unlikely to remember the sequence of doors.

Powerups, unlike in the previous part, appear much less, but more than enough for you, from time to time to accumulate on 1up, which is still measured in “caps”. You don't need to collect bullets for the rifle and keys – Dave has unlimited ammunition now. Not a very good decision – the developers KILLED THE HARDCORE! System cheat codes are the same as in Dangerous Dave's Risky Rescue.

Verdict – not good, not bad. But you definitely need to play. 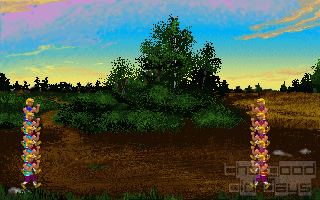