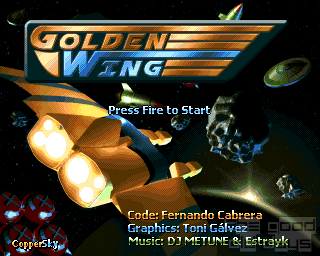 Some seminal game ideas just never die. Some have become so common that they are more or less in considered to be in public domain by now. Like Asteroids. It's a concept which just works: fly your spaceship around the (single) screen, blast asteroids, but be careful about it, because they will break apart into several smaller pieces which may go off on trajectories you never expected. Then, to spice things up, add some ufos etc. Which is exactly what Golden Wing does. In 2018, no less.

And in the end, why not? Golden Wing has nice animations, graphics are colourful (nice work considering the 32 colour restriction of the OCS chipset!) and especially the spaceship and ufo sprites look very good. The asteroids, while also not looking bad, unfortunately stick out a little bit stylistically. Breezing through the levels at first, the screen becomes pretty crowded quickly. The large sprites turning into a bit of a playability obstacle – or at least major difficulty factor – all of sudden. Between all the elements moving around, there is little wiggling room left for the player.

The second small irritation concerns control of the player's ship itself. Diverging from genre conventions, there is no inertia. Lift the foot off the gas pedal and the ship will stand still instantly. Turn and you will change direction without delay. All of which could make the game much easier, if anyone actually expected this behaviour.

So that's it, really. Golden Wing doesn't do anything wrong per se. Actually, it gets most things right. Nevertheless, there is little reason for it to exist above the cited "why not", as it does not even attempt to add anything to the concept or give the genre any new spin. It is essentially a "me too" game. Not that we should be complaining about the few new releases we're getting. But keep your expectations low if you decide to give it a try.