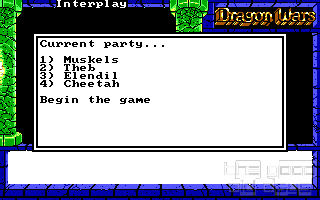 In every sense but the name, Dragon Wars is a sequel to Interplay's The Bard's Tale III: Thief of Fate. The game was programmed by “Burger” Becky Heineman, just like the previous game, and the working title all through its development was The Bard's Tale IV. Unfortunately for Heineman and designer Paul O'Connor, Electronic Arts owned the rights to The Bard's Tale and Interplay was severing ties with the publishing giant and going its own way.

Besides being able to import characters from any of the Bard's Tale titles, the game was stripped of all references to its predecessors and given a new name: Dragon Wars.

The game was released in 1989 for MS-DOS machines as well as a laundry list of 8-bit (Apple II, Commodore 64) and 16-bit (Amiga, Apple IIgs) platforms. The Apple IIgs version is the best of the bunch I've played – featuring a full musical score through that system's Ensoniq 5503 wavetable synth and flexible color palette. The MS-DOS release, meanwhile, plays a PC Speaker theme during the title screen while the game itself is silent. Despite a VGA option in the program setup menu, the PC version is limited to EGA-level graphics and its fixed palette of 16-colors.

Unlike most RPGs, Dragon Wars doesn't necessarily start with character creation. Instead, there is a pre-built party of four characters and you have to go out of your way to remove them before you can create new ones. There are no races or classes. Instead, character creation is a free-form assignment of 50 points between attributes (Strength, Dexterity, Health, Intelligence, and Spirit) and skills (various types of Lore, magic, and weapons expertise). If you want a sorcerer type, you assign points in the right places instead of picking “sorcerer” from a list. You are free to make a well-rounded jack-of-all-trades or a glass cannon. The manual includes some guidance towards creating successful characters, but it might take a few tries to nail the particulars you want for your party.

It's somewhat fitting, then, that the game starts by putting you in “Purgatory,” a prison-slum filled with prison-scum you may fight as you encounter them, which gives you a chance to try out your characters without investing too much time.

The game plays similarly to The Bard's Tale with a 3D first-person view, turn-based combat, and whimsical descriptions (“These boys majored in spleen kicking,” you're told of a group of King's Guards). An automap feature follows through on the box's promise that “no graph paper needed.”

Exploring Purgatory inevitably leads to combat with other slum-dwellers and sometimes the guards or wild animals. Combat is typical of the Bard's Tale-style dungeon crawler, with groups of enemies appearing at different (sometimes improbable) distances, orders given, then carried out and results presented. Dragon Wars complicates (or improves, depending on your attitude) the formula with different attack styles (Normal or Mighty), defense, spell casting, and item use options. Experience points and treasure is awarded directly after the combat ends.

The game features (and boasts!) no on-disk copy-protection. Instead, the interface is pure mystery meat (no on-screen or in-game help, only the reference card tells you that “?” opens your automap or how and when to find your way to the character creation menu) and the manual includes “paragraphs,” the game-enhancement de rigueur that includes colorful narrative passages in the manual instead of the game itself so that lacking the former makes the latter difficult or impossible to enjoy.

Dragon Wars came out at a weird place in gaming history – the sun was setting on the 8-bit systems, but MS-DOS computers hadn't yet taken over. Sound and graphics hadn't yet entered the VGA+Sound Blaster renaissance of the 1990s. As an 8-bit port, Dragon Wars doesn't benefit from the single-purpose development of some of its contemporaries (Mean Streets for instance) or successors like Might and Magic III: Isles of Terra which provided similar gameplay with VGA graphics, sound, and music.

Nonetheless, Dragon Wars is a remarkable swan song for the 1980s CRPG, demonstrating for perhaps one of the last times how far a single programmer's mind can reach. For fans of the genre and of The Bard's Tale in particular, Dragon Wars holds up as a worthy sequel. Just don't call it one. 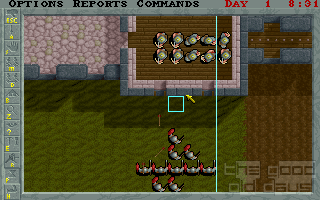