Voyeur II: Watching is not enough…
for PC (DOS) 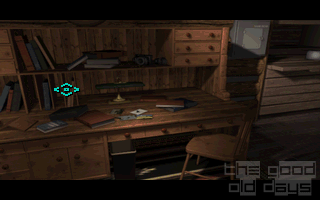 By the mid-90s, the few former CD-i exclusive titles were being ported to other systems. This sequel didn't even make it to its original home anymore, but instead, it only came out for MacOS and MS-DOS. A clearer statement about the commercial viability of further CD-i releases couldn't have been possible. 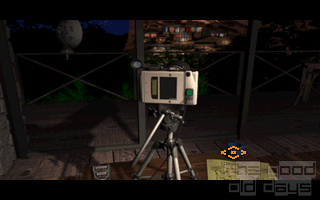 Voyeur II places itself in by then known waters. From a remote cabin (which isn't even connected to the regular power grid, but runs solely on solar energy – which turns into one of the issues to solve to finish the game), the player uses his video camera to spy on and record what's going on in the mansion across a canyon. There, a typical 1980s soap opera unfolds. The filthy rich owner of a pharmaceutical company has met an untimely death. It may have been murder. His former associates, friends and family delve into intrigues over who will take control of the company assets. And if the player doesn't prevent it, another murder will take place the same night.

So what awaits us is characters from screenwriting 101, played in an appropriately hammy way by unknowns with some minor have-beens mixed in. Anyone who has ever watched anything similar on TV will spot the two main suspects right away: how about the daughter with permamently wide open eyes (clear sign of madness) and the guy with the dodgy Italian accent acting all "fatherly"? Though at least the game has the decency to randomly select one of two plot variants with a different murderer and (partially) different turn of events on each launch.

On the gameplay side, the game's subtitle is to be taken literally. To a small degree. Small "puzzles" involve the already mentioned power management of the equipment and another item which is finally used to prevent the second murder. It all feels totally tacked on; if you've figured those correct actions out once, they turn into an annoying chore during each play session. 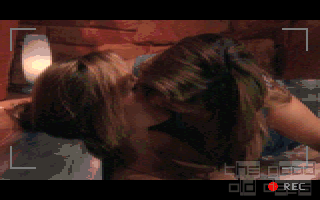 The main activity remains watching short video clips of what's going on behind the windows and finding the right window to spy through at each point in time. There is really no way to predict the right solution. Rather, it's a matter of patiently trying and failing until you stumble across something relevant in a subsequent playthrough. Hoping that what we get to watch is interesting enough to keep us trying.

One decent idea has crept in. Rather than always just watching, the player is given the option to directly influence the action exactly once. It remains literally a one-shot and can only be applied (in a useful way) at the very end. This idea could have been carried much further to finally inject the much missed real interaction: why can't the player also decide to have the family's phone ring, order them a pizza or whatever else to distract them momentarily? Which of course could have increased the need of shooting alternative scenes, but for the game's clear benefit.

The clips which need to be found (i.e. "recorded") follow the classic mystery genre convention: establish means, opportunity and motive and then prevent the second murder. Unfortunately, nothing else counts. Whereas the first game allowed for different degrees of player success, Voyeur II does not. You'd think that if you literally capture a live murder being committed on tape, with the murderer even shouting things along the lines of "I'm murdering you!!!!" (great stuff!), that could count as evidence. Comically, the game nevertheless plays the standard ending monologue of the sheriff lamenting "no witnesses" and that this case will "never be solved". This makes the path to "complete success" not nearly as smooth as it could have been. Limited, intermediate success could have easily kept motivation up; instead, the player obviously goes out frustrated in such occasions. 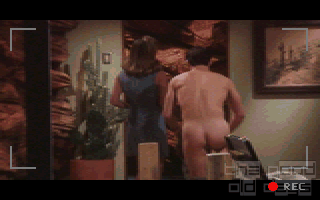 Breaking immersion even further, the central theme of spying through people's windows is instantly destroyed through video editing. All the clips are shot and edited in a regular TV/movie style, with zooming, panning and even dialogue in shot-reverse-shot. One has to wonder how the protagonist is supposed to pull all this off live with his one stationary camera, which should really just capture a static frame. The more cinematic approach of this game actually works against the illusion of being there.

The final blow actually comes from the technological side. Compared to the original game from 1993, especially the visual quality of this MS-DOS sequel looks like a clear step downwards. The CD-i may have had severe limitations in its hardware capabilities, but it had one merit: high colour depth. For the MS-DOS port of the original Voyeur, the videos had already been reduced to 256 colours and it's the same for this sequel. The screen resolution is also slightly reduced, but that's handled quite gracefully. The loss of colours, on the other hand, is not just directly noticeable, but also makes the picture look quite coarse and blurry.

Ironically, a complete beta version for CD-i made it to the Internet in recent years. Unfortunately, unlike the original game, this requires the system's optional MPEG module, which at the time of writing is not supported by any emulator. Given the low profile and popularity of this system, it will probably never be emulated. If you are one of the very few people with the original hardware in their possession, you may get to see the game in its intended glory. Us normal folks have to do with this sub-par version.

Though even putting technology aside, it has to be stressed again that Voyeur II overall is really a not so good sequel to an already less than perfect game. Three years along, the gloss of the new is gone, and the one noteworthy attempt at evolution does not go anywhere. If anything, game design quality has deteriorated somewhat.