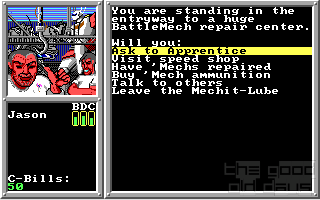 A unique blend of role-playing, tactical strategy and adventure, Battletech: The Crescent Hawk's Inception was one of Infocom's first forays into graphical gaming. For years, the company ruled the text-based gaming, and with this ambitious product, wanted to cross over to the increasingly popular graphics-based games. Developed by Westwood's finest, the game became immensely popular, despite its balancing issues and weak graphics.

In this game, you assume the role of Jason Youngblood, on a quest to find your missing father and to assemble the Crescent Hawk elite team. You start out virtually with nothing, but over the course of the game get to fight in several mechs (giant robots), find a few sidekicks and if you know how, assemble a small fortune by trading and stock market speculation. In addition to adventuring (most quests have different solutions), you will travel between several planets, fight against other mechs in tactical combat and die, maybe a little too often.

The game is presented in a top-down view, Ultima style. For 1988, the EGA graphics are a little weak, and the in-game cut scenes suffer from an Americanized imitation of Japanese animation, which, in my opinion, greatly detract from the authenticity of the game. The interface is fully keyboard-based, and I found it more intuitive than, let's say, that of Autoduel, which for some reason strongly reminded me on this game.

What really hurt the game, in my opinion, was an enormous learning curve. For the first several hours, you'd be dying like crazy, fighting against much stronger opponents. On the other hand, once you survived the initial onslaught, the game became very enjoyable, with lots of rather unique quests, plenty of dialogue and a well-developed story.

What made the game so popular was the brand recognition, and the enormous amount of goodies that came in the box. In 1988, Infocom still ruled the gaming world, and its name on the box (along with Westwoods, which prior to this title scored huge hits with Phantasie III and Summer Games) assured great sales. To leave nothing on chance, Infocom included a poster, a mech technical manual, and a metal Crescent Hawk pin in the box. In addition, the first people who found the hidden LAM (Land-Air-Mech) at the end of the game a Ral Partha mech miniature.

Overall, the game is definitely worth remembering, not only as the only Robotech-based roleplaying game, but also as a rather enjoyable title. In addition, Battletech I was historically significant because it introduced several key players to the gaming world. It was programmed by Louis Castle, who later designed Dragon Strike and later moved on to head the Westwood division when the company was acquired by Electronic Arts. Paul S. Mudra was responsible for the music. Battletech I was his first project, followed by nearly all Westwood games, including the entire Command & Conquer series. The third debutant was Brett Sperry, who later created the Command and Conquer universe.

While the game is fun to play even today, try to get the original box if you can. At a time when game boxes get smaller, manuals are frequently available in electronic form on the game CDs only and extras are unheard of, it is nice once again to hold a game that showed that the publisher cared for its fans.

NullVoid:
It's a bit silly at times with the battle animations even being repurposed for the movie theater, but this was my gateway drug into the wonderful world of Battletech and Mechwarrior.
NetDanzr:
Feel free to share anything about BattleTech: The Crescent Hawk's Inception (1988) here!
[Reply] 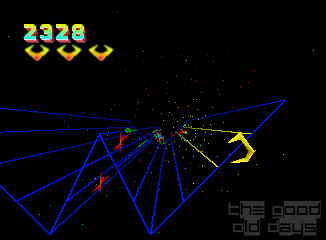