Beneath A Steel Sky
for Amiga 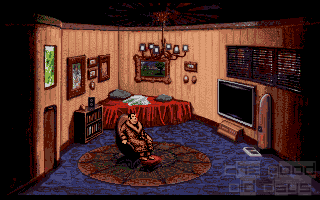 A good opening is the most important part of every piece of fiction. A man kidnapped and taken into an industrial mega city. A helicopter crash and a narrow escape. Hiding inside a factory. Accompanied by an excellent soundtrack, perfectly aligned to the scenery as the metallic stomping of the machine almost becomes part of the tune. What else can we do but fall in love with this game? Beneath a Steel Sky gains so much credit that it would be hard to spoil the overall impression later on. Good news: it never manages. It doesn't even try. Even if some small spots may appear on its shiny white vest.

Compared to Revolution Software's rather experimental previous game, things take a turn for the conservative here. Or it could be called a "classic interpretation of the adventure genre", depending on one's viewpoint. Robert Foster, controlled by the player, is fully in charge of his story, nothing ever happening in this world without Foster somehow triggering it. Early on, he receives the most human robotic sidekick since Planetfall's Floyd, communicating in wonderfully sarcastic one-liners, changing shells as progress allows. This duo sets out to unravel the mystery of Foster's kidnapping which may decide the fate of the whole city. With an off-screen bad guy answering to the name of Overman whose goons run around in SS uniforms, it's not hard to guess what side of the moral compass the local authorities are on. Though why do they want Foster? 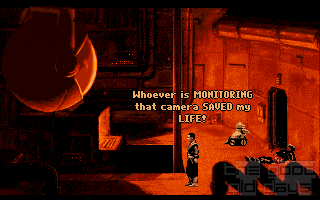 The urgency of the escape and the subsequent chase gets a bit lost after the first scenes. In typical adventure game style, the game world slowly opens up to allow for paced exploration. The stunning background artwork, provided by none other than the great Dave Gibbons, keeps overall atmosphere at a good level throughout, however.

The inherent shades of Metropolis in the way of the rich living safely underground whereas high up in the skyscrapers, the common people slave away to keep everything running are not particularly prominent as far as it comes to people. The unwashed masses are nowhere near a rebellion, but more concerned with everyday trivialities like their lunch break sandwich. The rich "elite" being represented mainly by an ignorant moron. People are still just people, it seems.

Meaning between strong, atmospheric scenes such as the exploration of the abandoned subway system, there is a lot of comic relief to be found. In places, it crosses the border towards over-the-top unfunny, most notably in the courtroom scene which really cannot be associated with the theme of an oppressive regime. Then, there are the visits to virtual reality/cyberspace. Such an abstract setting, a staple of the cyberpunk genre, is always hard to represent right. This particular instance unfortunately has turned out rather bland. 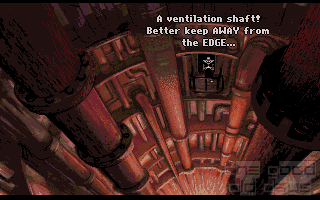 Speaking of bland, this term, unfortunately, also describes much of the gameplay. In more positive terms, it could be called "unoffensive". Controls, distinguishing just between examining and using/manipulating, work unobtrusively. Puzzles are solid, but overall unimaginative. They are logical across the board and combined with the simplistic controls not allowing for any specific actions, you will virtually never find yourself stuck. Frustration avoided, but also, there is nothing really worth remembering the gameplay for in positive ways, either.

With all this at least never getting in the way, players are free to simply enjoy the setting, take in the backgrounds, enjoy the nice animations and see the mystery unfold in predictable, but nevertheless entertaining ways. This is because essentially, Beneath a Steel Sky offers the archetype of a story. Fans of genre material will appreciate it without a doubt.

Technical notes: The floppy version consists of 15 disks, playing it without a hard drive is hardly possible. If you have this version, don't try the built-in installer, because it has a bug which prevents you from installing more than the first disks. You have to copy the contents of the disks to your hd manually. The CD version (made for the CD32, but works perfectly on a A1200 or A4000 with a CD drive, too) features full speech in addition. This comes at the cost of not being able to save the game freely. Level codes are used instead to jump to specific pre-defined points in the game.

If at first you don't succeed.... Lure of the Temptress wasn't a very good game, but it did receive quite positive reviews - let's just say there are and were games which are even more overrated. After that, Revolution Software took their time to develop a successor - and they succeeded in a brilliant way!

Robert Foster (named after the beer brand - I'm not joking!) came to the "Gap" (the polluted land outside of the huge cities where only outsiders and freaks live) when he was a child - his helicopter crashed and his mother died. A tribe adopted him and he doesn't remember anything about his former life anymore. He has grown to be an adult, learned how to survive in the wilderness and his best friend is a robot called Joey.

Some day, another copter arrives, carrying soldiers. They're determined to take Robert "home" and they don't hesitate to kill everybody in the village to achieve that. Just as the copter arrives over the city again, its controls lock up and it is going down.... giving the lucky survivor Robert the chance to escape again - but now he is in the city, a modern Metropolis (not Superman's city, but the one from Lang's movie of the same name), 'foreign territory' to him!
How can you get away from the security force? What do they want from you? Who is this 'Overmann'? And what part does 'LINC', the city-wide computer system, play in this? Maybe saboteurs from Hobart, another city, are involved?

I must confess I'm not in any position to be objective about this game, because Dave Gibbons has been involved in it. I can hardly think of something which would get a game a bigger bonus with me! In case the name means nothing to you: Gibbons has been involved in some of the greatest comics ever, both as a writer and of course as artist. Most notably of course Watchmen as well as 2000 A.D., Green Lantern and more recently, he designed the logo of Oni Comics and he's working on The Originals.

For this game, Gibbons drew not only the in-game background graphics, helped designing the characters, but also made an eight-paged comic which serves as an introduction to the story. Certainly not his strongest work, but for computer games standards, it is terrific! Funnily enough, the drawings come over better in the game itself than in the comic.

Game-wise, Beneath A Steel Sky is a refreshingly conservative point & click Adventure. It belongs to the very last generation of this genre, i.e. it is not using any verbs anymore, just left mouse button for 'examine' and right mouse button for 'use'. With this overly simplified system, even beginners won't get stuck for too long. Especially since puzzles are mostly logical. Only downpoint there is that sometimes you're forced to do some pixel-hunting.

The story evolves nicely, your sidekick Joey provides some sarcastic humour, most places and characters fit in nicely. Not everything's perfect there, either, of course. Some scenes don't have a real connection to the rest of the story, they seem to have no purpose. Take the court scene for example, it only serves for a few cheap laughs, it doesn't help the story to progress and it doesn't fit the general athmosphere. Same with the pretty lame 'virtual reality' sequences. Sometimes, dropping additional ideas - as good as they might be in theory - is a virtue, too, if you can't fit them in smoothly.

Beneath A Steel Sky is Revolution Software's best game by far. Not before and never after this one, they succeeded to make a somewhat challenging (everything they did later is just a collection of empty screens with nothing to do) and also interesting game. Not only worth a look, but worth staying in everyone's collection.

Technical notes: The floppy version consists of 15 disks, playing it without a hard drive is hardly possible. If you have this version, don't try the built-in installer, because it has a bug which prevents you from installing more than the first disks! You have to copy the contents of the disks to your hd manually.

The better alternative would be to get the CD version (made for the CD32, but works perfectly on a A1200 or A4000 with a CD drive, too) which includes full speech in addition. The voices are well done, I just never understood why the Scottish accent is featured so prominently. But then again, the usual US-accent isn't any better. The disadvantage of the CD version is that you can't save your game to the hd. Instead, you're give 'level codes' at some points of the game.
Some sites mention the existence of a second CD version which takes full advantage of the AGA chipset, but I've never been able to confirm its existence - nobody could even show me a screenshot which contains more than 32 colours. That is why I think some people just stumbled over the CD32 version and automatically assumed it to be AGA, too. If anyone has this version, though, I'd be more than interested to hear about it!

Another note: All the downloads of this game from this site are legal!

Mr Creosote (2009-03-17):
Dave Gibbons is, in my opinion, one of the best comic book artist for the 'superhero' genre. His style is just right there. Too bad he doesn't seem to draw much anymore at all. Seems he concentrates on writing instead.
Wandrell (2009-03-17):