The Blackwell Legacy
for PC (Linux) 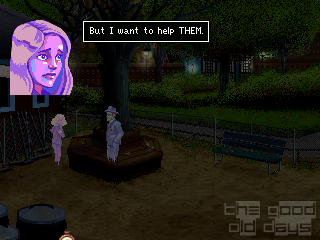 Episodic formats are very convenient for marketing purposes, because you can milk your customers which are already hooked repeatedly. After all, who will just quit after playing through half of a story? Right, people will pay for the next part, the one after that and so on for the rest of time. In theory. As tempting as it may seem to take advantage of this, you're also taking two big risks designing your game in an episodic fashion. First, you actually need to get your audience hooked. Second, you need to design your narrative to work on two levels: the small story of each episode which needs its own beginning, arc and resolution as well as the global plot spanning over all episodes.

The first episode is obviously the make or break moment for such a concept to work or not. The Blackwell Legacy has already been followed by various sequels, so we may assume it worked out. Though playing it, it is almost a bit hard understand. Starting out, the opening scene shows Rosangela, the protagonist, scattering her aunt's ashes. So far so good, it is a classic 'instant connection' moment between the player and the protagonist. If it weren't for the lines she speaks which seem to come straight out of a shallow soap opera (or is that really how people talk in the USA?). Then, on the gameplay side, things get worse with the first thing you're tasked to do is to get past some guy who won't let you into your own appartment for no real reason at all. What a trite cliché! 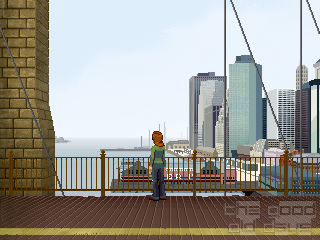 Things pick up a little from there. Rosangela receives a couple of relateable character traits, like her light social anxiety, illustrated perfectly by her awkward, forced smile seen in conversation closeups. The puzzle about getting the neighbour's attention isn't half bad either. But boy, is this game chatty! It sets itself in the extreme wing of the general school of Adventure games in which you talk, talk and talk almost endlessly. The plot is told through conversation. Puzzles, as far as they exist, are mostly conversation mazes. In fact, the only puzzle really conducted outside of the conversation system which needs to be solved on the first game day (of two) is already behind us at this point.

The voice actors all do a pretty good job to make this bearable. Nevertheless, it is one-sided to the extreme, and the rest of the game plays along with this impression. The graphics, drawn and animated in attractive 'retro' style, are crammed full of little visual details none of whom are available as objects in-game, i.e. they cannot be interacted with. While this probably makes it easier to focus and keep the plot running, it is the typical distinction between an amateur production and professionally made games. The former just design their main solution path, the latter (at least the good ones) follow the paradigm of entertaining their players also when they stray (or are stuck). So in this respect, The Blackwell Legacy is unfortunately not on a level expected from a commercial game.

On the positive side, the game tackles the typical issue of all mystery/investigation games. All too often, games with such themes take place mostly in the player's head, as conclusions need to be drawn. This is usually awkward, because there is virtually always a mismatch between player and character knowledge. Either your protagonist will suddenly spout knowledge which you didn't get to yet or she will act incredibly stupid, failing to see very obvious things. Blackwell Legacy, probably inspired by Discworld Noir, makes this explicit through its notebook mechanics. Subjects are automatically entered and can be looked up at any time – but they can also be combined to try and draw new conclusions. This works pretty well as it feels organic with respects to the challenge. 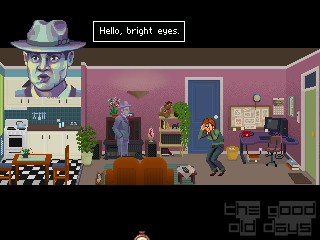 So not all is bad. The inherently ridiculous plot about a woman recognising she's a medium chosen by fate to help dead souls 'move on' is presented with the necessary amount of deadpan humor. One quite nice more object-based puzzle (managing to talk to your ghost companion without others believing you're mad) appears later on as well. The difficult task of this both being the protagonist's 'origin story', but also balancing this with the need for a first, short task for her to fulfil in her new role has been pulled off well enough, too.

Nevertheless, the immediate appeal is just not there. That feeling that after finishing this, you really want more; that you will run right back to the (virtual) store and buy the next episode straight away. Maybe it's that the episode just feels too self-contained (no cliffhanger to be found). Though the more likely explanation is all that has been laid out before in this review. Many ideas and elements are there. Their balancing leaves something to be desired. Some design aspects are still on the level of an amateur production made in somebody's spare time after work hours. Which doesn't need to be bad, but as soon as you expect people to pay, you better offer something more than the barebones, as decent that craft may be. Blackwell Legacy attempts to do this with technical production values, i.e. excellent music and professional voice acting. All of which is nice, but it does not replace progress in the area of game design.