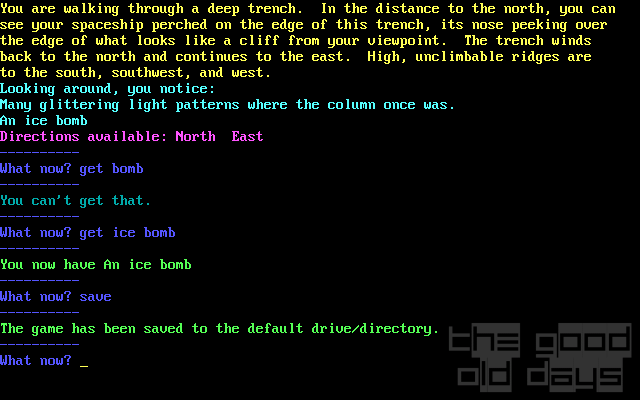 There have been a number of strange excuses why you suddenly have to bounce balls back into a wall with a movable paddle. Arkanoid with its space war plot is notorious for that. Of course, it never went beyond the semi-ironic excuse stage. Never… until Spore!

OK, admittedly, the plot concerning broken contact with one of earth's colonies which is laid out completely in the accompanying documentation is probably also not much to write home about. The player is sent to investigate and finds the abandoned leftovers of the apparent attempt to build a city. There and also in the surrounding wilderness, unnatural beams of light emerge from unlikely places. What is it that may have happened here?

The player investigates in text adventure style: a manageable amount of locations, access to some of which needs to be unlocked first, awaits exploration. The location descriptions are fairly sparse and the geography is only semi-believable. Mentioned scenery objects are rarely important. Separately marked movable items are scarce. As the player soon figures out, one light beam exists per location; some are already there, some need to be activated through simple puzzles. And entering such a light beam unleashes, of all things, a Breakout level!

Well, that was a bit unexpected (if it weren't written on the official website and in the documentation…). The quality of the text adventure certainly isn't revolutionary. It follows the classic treasure hunt paradigm of picking up basic tools in unlikely places (sometimes appearing out of thin air) and using them in straightforward ways in other locations. The vocabulary the parser understands is severely limited and even depends on the location and available objects. So in one place, a verb may work, whereas it may throw a generic error message in another one. Though given the low number of locations and objects as well as the standardised task, things stay simple enough.

And what about Breakout? Although there are no specials, like powerups or different tiles, the sixteen levels offer enough variation simply through the block layout. There is the occasional ball physics oddity, but the extremely forgiving collision detections more than makes up for that. Also (bug or feature?) when restoring a saved game, the number of available 'orbs' (lives) is reset (along with the score), so you can basically try as often as you like anyway.

Then, after clearing the last ball & paddle level, the game simply ends, concluding the plot in one paragraph without having given any intermediate progress in between (not even small hints). Certainly, Spore isn't the big revelation which gives much desired meaning to the Breakout genre. You could still ask yourself why entering these lights puts you in this abstract arcade game (this is also not addressed by the ending). Still, it's not a bad attempt insofar that it at least frames the action and it won't waste too much of your time anyway. 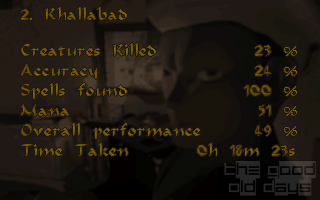