Stop the Express
for MSX (MSX) 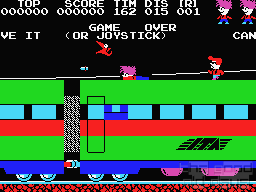 The ITA Express has been hijacked by the criminal gang called Redmen. It has lost control and is going nowhere. As a Special Security Agent you must hurry and find a way to stop the train before it's too late. You are to proceed all the way from the rear of the train to the engine cabin to manage controls and bring it to stop. Meanwhile, the Redmen are pursuing you, so you must find a way to drop them off if you ultimately don't want to get dropped yourself. Quite literally.

I was somewhat indecisive as to which version I should really review - Spectrum or MSX. They look pretty identical despite a few different colors here and there. But finally I decided to do the latter since I never played this game much on Spectrum and it looks more native to MSX since Hudson is really a japanese company that is known to have produced a much greater number of games for MSX than Spectrum. Besides, the MSX section here has been bare for a while now, and this game will finally do the opening.

As the game starts you are lifted down on top of a full-speed going train from an out-of-range helicopter. Now you have to walk right-to-left along the top of the train and inside to reach your final destination - the locomotive. The game consists of 2 stages. On each stage there is a certain number of carriages that you must pass safely - half on the roof, and half inside the train. On top of it all, there is a time limit which I so much don't like, especially in case of this game, which I reckon is fairly difficult without it. You have 3 lives, you are unarmed, constantly attacked by gangsters and all you can do mostly is jump, jump, jump... and duck.

On first stage you move forward, leap over the gaps between carriages, and in doing so avoid getting struck by occasionaly passing overhead posts which you are warned of by “Caution!” message. The Redmen pursue you from the rear and throw knives at you (look more like bullets to me). To avoid knives you simply drop flat, but best not to make it into a coffee break, cause the Redmen are getting closer and will pretty soon become pain in the ass. To rid of them you either kick them off the train or catch a Snakebird and release it at the enemies. You can only possess one Snakebird at a time, so to get a new one you will first have to release the old one.

The second stage takes you inside the train, where the challenge is doubled. The Redmen are coming straight at you, and it's not always possible to spot them immediately as they are sometimes hiding in the concealed passage between the carriages. There are no Snakebirds here, but there are passenger straps hanging down from the ceiling which you can grab onto and suspend yourself in the air to let a few Redmen pass or to drop down on them conveniently. Unfortunately there are also these nasty one-eyed ghosts occupying the ceiling which make the jumping dangerous, so you have to pick the right time and spot, which may sometimes even force you to go back a few carriages.

The last carriage before the engine room is the final challenge: here you have to grab a key to the engine room and avoid getting whacked by some weird ass bouncing screw. On completion you get a terribly misspelled “Congraturation! You sucsess!” message, which only proves my point that this game is more native to its japanese platform. Each time you complete a level the game starts anew, but with upped difficulty: the Redmen multiply and start coming from both directions, as well as posts, ghosts and carriages also gradually grow in number, which is one way of making the game seem longer.

The graphics are pretty nice for 1983, but the gameplay itself may appear somewhat dissatisfactory. Like many games of that time period this one gets boring after completing the 1st level, since there is practically nothing new to discover except perpetually growing number of foes and obstacles which will sooner or later prevail. There is no real end to it, unless 1 level is all there is to it, in which case the game is awfully short. On the whole, this is a nice side-scrolling action game with a pretty original idea worthwhile enacting, but... only until “you sucsess!” once.

That little dude hardly looks like a secret agent or a superhero, more like a drug addict

Mr Creosote (2016-02-20):
Quote:
But don't expect no James Bond or Indiana Jones here, cause this is only 1983.
Why not? James Bond had been running for two decades at that time and Raiders of the Lost Ark precedes the game as well!
[Reply] 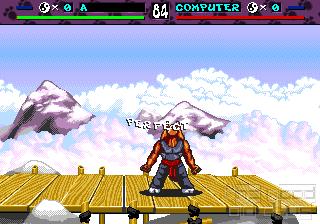