Rings of Medusa II: The Return of Medusa
for Amiga (OCS/ECS) 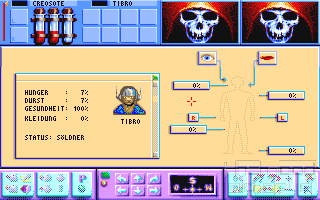 You'd think that a sequel to a fairly popular game would be at least known to people. With Return of Medusa, Starbyte managed the impossible: making their sequel completely obscure. So far that nowadays it is a hot contender for the title of “most misclassified game”. Because it is not actually a role-playing game!

At least not primarily, but we'll get to that later. In an absurd twist of events, the evil goddess Medusa, whom the player defeated in the first part, is not actually dead, but has escaped to the future where she has once again conquered most of the realm. In typical pulp villain fashion, she cannot resist gloating to newly crowned king Cirion, who promptly follows her through the time tunnel to take her on once again. 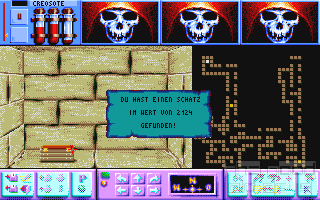 The game which unfolds based on this will, admittedly, be a double-edged sword to many. The core gameplay is identical to the predecessor: you wander around the country, visiting cities to trade, build up an army, equip and train it so that you can finally defeat the forces of Medusa. Just that everything is “reskinned”: instead of cavalry, you now have tanks, instead of dragon riders, you have helicopters. Names have changed, graphics have changed, but you should feel right at home if you've played the previous game.

But having already played all of this before, it also doesn't feel quite right. Changing Blackjack into Roulette does not really justify a new game, you could say. If it weren't for… yes… the one new major feature which today, has turned into the bane of the game. The reason absolutely nobody plays the game.

You see, instead of searching for magical rings, you now need to locate thirteen keys to finally open the bunker which the Medusa is hiding inside. Which, again, could just be another renaming of things, but they actually made a little sub-game out of it. When you locate those “treasures” on the map (like before), it's not that you find it right away, but rather you only find the entrance to a bunker which then contains the keys. 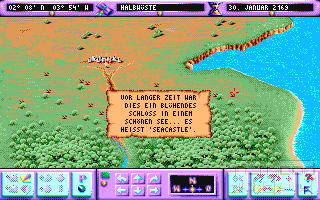 In the bunkers (and the same happens when you enter the old subway stations where you can find & free prisoners who will then join your party), the game suddenly does turn into a dungeon crawl, with everything you would expect from it: hunger and thirst clocks, weapons, armor, keys etc. None of the dungeons are really huge or overly complicated; usually, they consist of one of two floors. In fact, they are rather well-done considering they are just a minor side feature.

And yet, there are two things about them which drive everyone away. First of all, the game starts out in a dungeon. Without a manual (which, for some reason, was the state most people will have received it and will still receive it), new players will not even know there is a whole strategy game waiting just two floors above. Putting this as the start of the game – big design mistake, because it causes immediate confusion and disorientation! Second, whereas real death was a fairly rare occurence before (being defeated in battle, you would just lose your army and your goods, but you could play on), the dungeons make this a much likely affair.

While Rings of Medusa may also have been a bit of a genre mix, at least it took place mostly within one “macro genre”, i.e. strategy (save for the arcadey sea battles). A dungeon crawl is a completely different genre entirely. Certainly, it was bold to put this in there and it is hard to criticise a game for the only novelty it offers – because without it, it would be a fairly tired sequel – but this combination really narrows the target audience down significantly. People who like trading, strategic wargaming and dungeon crawls! 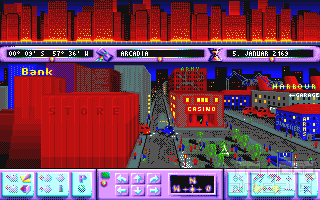 We could go down more into details, like how the dungeon sequences take too long and thereby detach the player from the main part of the game. Which would be true and certainly not ideal. Though comparatively, it would be complaints about little details which don't matter much in the global picture.

What the game has going for it is the fascination of revisiting this land you already know from the previous game and see what became of it in those centuries which passed since then. To wander the “same” map which has now become a wasteland with only few mega cities. Building on this theme, making it stronger explicitly could have been a way to go for this sequel. Even introducing new elements, like those dungeons with a few alterations or maybe just another short action sequence, could have worked. But they really shouldn't have thrown the players into the cold water like this.

So now you know what the game really is. Now you should know whether this is a game for for. If so, it is a good one. That much, you can be sure of. Just that you won't find many people to discuss it, because nobody else has played it. 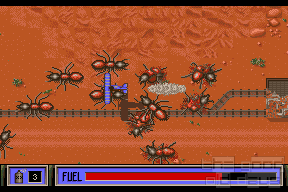