The Wacky World of Miniature Golf
for CD-i 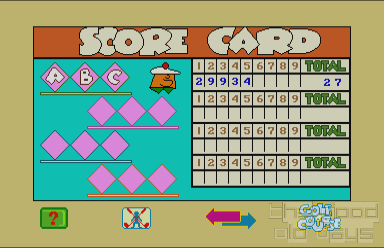 If something calls itself “wacky”, it's usually a bad sign. It looks like a clinical case of overcompensation. “Weird” Al Yankovic anyone? Then again, a straight miniature golf game on a computer may not be considered too exciting.

So how is this game “wacky”, exactly? The courses are not exactly as you would expect them to be. The holes are located in quite unlikely places, behind various non-standard obstacles. For example, playing in your garden behind the house, a lawnmower and a dog are driving/running around. Hitting them, the ball may bounce or be outright destroyed.

Gameplay is as simple as it gets. The choice you have to make is just whether to hit straight, left or right. Time it right and you'll progress (or even finish). So, yes, ultra-simple. Everybody can play. 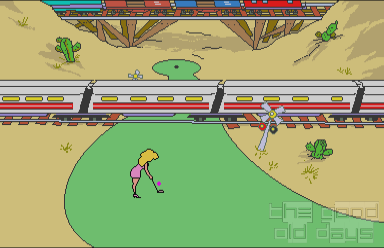 There is one catch which limits the fun factor. Given the typical CD-i limitations of rendering animations “live”, timing is not completely free. For illustration, let's talk about the train level (pictured). Two trains are alternatingly crossing the way to the hole: a white one and a blue one. You may think the approach is obvious: given that they're running pretty fast, you would try to time your straight shot so that you hit the ball before the faster train (white) has just passed, so that the ball reaches the tracks exactly when the train is not there anymore. The ball should then cross before the blue train can deflect or destroy it.

You thought wrong. Try it, and the white train will crush the ball. Because, you see, the possibilities of what can happen are strictly limited. Shooting straight, the game only knows one thing: the white train crushing the ball. I.e. although the blue, slower train should have following, the animation of the white train arriving will instead be played out. It must have teleported back to the left hand side of the screen. Similarly, the lawnmower will suddenly appear from the unexpected side of the screen etc. when you try the “wrong” things. 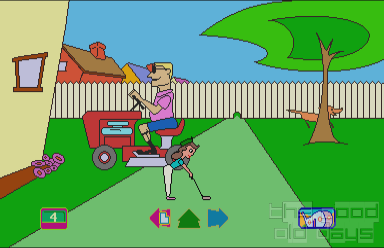 This is a pity, because it makes Wacky Minigolf a game of memorization rather than skill and logic. Trying the logic approach, as outlined in the example, you can never know what will actually happen. Rather, what you need to do is try each of the three possible angles out with some sub-options allowing for different timing and just see. If it works out, remember this stroke for next time, because it is guaranteed to work again.

Now, this may sound pretty bad, and for serious playing, it is. The thing is that both the failure and even the success animations in flat cartoon style play out in the “wacky” sense. Interpreting it as a casual party game, the intended reward may not just be finishing hole after hole, but rather watching and laughing at the more or less crazy things which may happen. The corny off-screen commentator further enforces this impression.

I.e. this is a game which you are probably not even supposed to actually train and get better in. You're just supposed to have fun without being too ambitious about winning. More and more, I get the impression that the CD-i was in fact the spiritual predecessor of Nintendo's Wii… 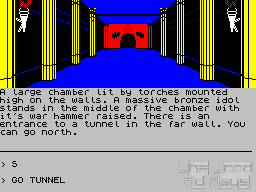