Hole in One Miniature Golf
for PC (DOS) 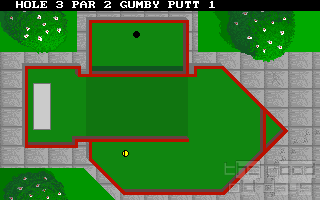 Miniature Golf, as all kinds of Pool, is essentially a geometry game. As such, it lends itself well to the computer game medium, as the way from cause to effect is a clear mathematical derivation. On the other hand, the issue lies with the computer-controlled players. Due to the very same nature of all possible actions being calculable, they could play perfectly, which of course wouldn't be a whole lot of fun to compete against. Though Miniature Golf, unlike Pool, can also be enjoyed without any opponent…

Hole in One can probably be considered the ultimate genre entry. It has a shitload of courses available, ranging from the classics to geometrically really complex ones (some of which would be impossible in the physical world) and finally to those which are just crazy. It goes as far as even the hole sometimes not being clearly visible anymore. 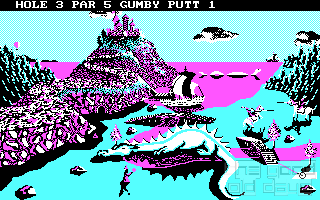 Graphically, the game is serviceable, at least in EGA/VGA modes. In CGA, as expected, it does not look so hot. Most courses apply an overhead view, which suits the gameplay very well. Some of the weirder ones go for some pseudo-3D, which doesn't quite work, on the other hand. That is because the extra dimension is not really taken into account in the calculation of the bally trajectory. I.e. the courses still play as if viewed from above, although they don't look like it.

Sticking to the more worldly courses, gameplay it pretty much spot-on. Mouse controls are as intuitive as it gets: set the direction and strength through the angle and length of a line. That's it. Sure, maximum strength is ridiculously powerful, but nothing forces you to apply it. Beyond the very basic ones, some courses actually turn into small, puzzly brainteasers. It is, of course, nothing fancy which you will constantly play for years to come. However, it is just the right thing to play during a short break. 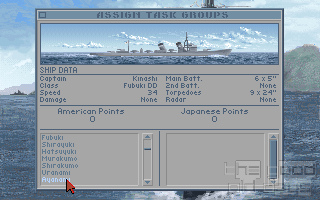