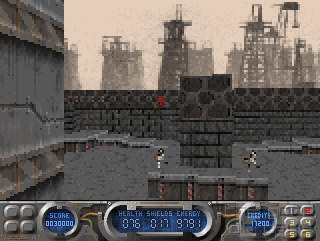 After Gloom and Alien Breed 3D, the announcement of Breathless must have raised some interest. After all, both previous games had featured pretty coarse graphics, whereas these new screenshots… wow! When it finally came out in early 1996, the biggest fear was even averted: it did run smoothly enough even on just lightly expanded A1200 equipment with only little graphical degradation. Double wow! 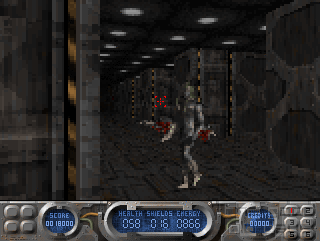 Nevertheless, disappointment sets in very quickly. What is technical competence worth if gameplay just isn't any good? At least Gloom scores well in level design. Breathless reveals itself right off the bat, when the very first level is basically just a straight corridor, but with little alcoves in each of which there is an enemy hiding, who will jump you when you try to pass. Annoying and incredibly unimaginative at the same time!

This design feature, unfortunately, sets the tone for the rest of the game. You can be sure that behind every door, a pack of enemies will be just waiting. The game features different height levels, but although you can look up and down, you cannot shoot enemies above or below. You can jump (or rather fall) down, but never up; not even the tiniest step. You can also fall into lava pits, but there is no way to ever get out again. Levels are almost all the same, faceless string of samey corridors, with very few exceptions.

Talking of samey corridors, after the excitement of finally finding a smooth 3D game on the Amiga fades, you will notice that everything sort of looks the same: grey corridors, even when there are different wall textures. Gloom, again, at least had vastly different looking areas; so even being less sharp, the graphics provided more details of interest. Here, the only effective difference seems to be the amount of light available (ranging from “little” to “just too damn dark”). The levels taking place partially outdoors (which basically means there is an unreachable background wallpaper) are few; not that I'm complaining about those at least look good and are not forgotten right away.

Visually, even most enemies blend in with the walls, being also grey and all. Not to mention that they are mostly featureless. Their behaviour, on the other hand, has actually been thought through. They will try to avoid the player's shots, try to scatter when in groups etc.

Around the same time Breathless was released, Gloom Deluxe also hit the shelves. Offering graphics of similar technical quality, but coupled with better art. Being a little more limited (no height levels…), but sporting decent level design. It had a great cooperative multiplayer mode (and a pointless deathmatch one), whereas this game can only be played alone. Even inside the confined world of this dying system, there was no reason to buy Breathless. 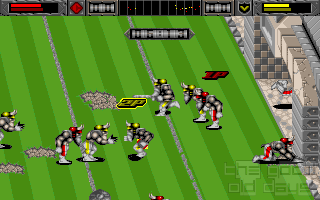