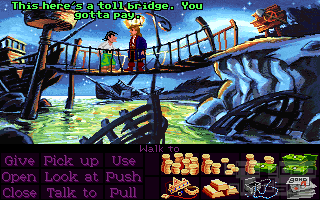 This has to be one of the best games ever made, if you are into Adventure games and you have not played this then where have you been? It's worth playing through the almost-as-good Secret of Monkey Island so that you have the background in order to play the second installment.

I still play this game after discovering it almost 27 years ago, with the simple point and click interface, humour and witty dialogue, I was amused for hours tying to figure out the puzzles, back then you never had the internet to download a walkthrough you had to read magazines or ring a tip line.

You start out by playing the character Guybush Threepwood in search for the lost treasure Big Woop, after defeating the pirate LeChuck. You arrive on Scabb Island to find LeChuck's former right hand man running the island, and before you can leave you have to outwit him. On the island Guybrush will meet Mojo, the voodoo lady and with her help will try to free Scabb from Largo. But when Guybrush meets Largo he show shim LeChuck ghost's beard to prove he killed it and he got is sealed allowing Largo to resurrect LeChuck. Guybrush will go through many adventures, researches, spitting contest, necromancy and puzzles to finally find Big Whoop and kill LeChuck forever.

The adventure is divided in four chapters, even if the first and the sencond are way bigger than the other two and they are “The Largo Embargo”, all set on Scabb Island, “Four Map Pieces” set in Scabb Island but also in Phatt Island and Booty Island, “LeChuck Fortress” and “Dinky Island”.

Sincerely I don't know a single person who beat a graphic adventure in less than… months! I'm pretty slow to beat games and it took me years to complete Monkey Island 2 so I can't help to give the highest grade possible. 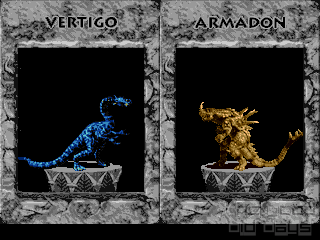