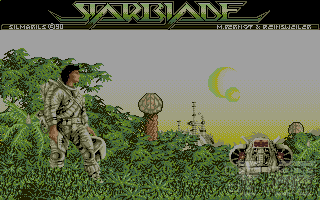 Review by ThyPersonalSnoop (2018-09-29)
Quote:
Something's afoot in space: Genolyne, priest of chaos, rules the known universe with an iron fist. The “Fighting Science Front” forms the opposition, fiercely battling Genolyne and her underlings. The assassination of one of the Science Front's leading figures escalates the conflict even further, so that a battle-hardened, cunning agent is sent to finally break Genolyne's power…

Starblade was one of my first DOS games. I bought it in the then fresh format of a games magazine + CD-ROM, namely the “PC Spiel SPECIAL 2/96” covering the science fiction genre. The full version game included was just six years old then, published by Silmarils and not exactly a highlight in the history of computer games. I'm presenting it as a model for potential which failed to materialize, rather than really recommending to play it.

The solid visual presentation is not among the reasons for that. Graphics – those socialized by Commodore may disagree, but I can appreciate such pixel art – are one of the most striking ingredients of Starblade. The player character sprite even recalls the likes of Captain Future.

Over the decades, I took several attempts at playing through the game. The latest one just recently before writing this very text (September 2018). Though finally, I only took a couple of screenshots. I felt it wasn't necessary to capture more than the beginning, as the levels (if you can talk about such a structure in this game) turn out to be rather monotonous – which applies both to the gameplay as well as the colouring. For a hobbyist game, I wouldn't have minded, but this one formerly resided in the full price range, so expectations are higher… even if it is 30 years old!

I can wander the spaceship, take inventory of its resources or fly to several planets to do some trading… a notable beginning, but insufficiently followed up.

Our nameless hero, the “cunning agent” mentioned at the beginning, has his cunningness limited severely by technical restrictions. He moves only from one screen to another. I've often read that in DOS, scrolling backgrounds cannot be done. Though thinking of some other games (Commander Keen, Lollypop or a Sonic the Hedgehog demo written in BASIC), it seems some of these examples are doing rather well considering it is considered “impossible”! In any case, both the Amiga and Atari versions show their solidarity with the DOS Starblade in this respect. Maybe, statements like “this is impossible” should be understood to mean rather “we didn't manage”.

Stiff movement (compared to modern-day Animes) of the protagonists is something of a charming feature in some of the cartoons from the 1970s. Starblade cannot take credit for this, on the other hand. The hero is able to duck – this singular evasion technique doesn't always work against enemy shots. There is no way to get him to jump even an inch. Apart from that, he can draw his light sabre (though not deflect energy beams with it) and hit the enemies' hips until they disintegrate; in the later game, he can also use one of the few guns. Or he can just keep his light sabre ready in hand at all times, even when flying the space ship.

The enemies are mostly reptiles, insects, humanoids or robots, neither of which show any notable artificual intelligence. Other platform's versions exchange the antagonist sprites, but in my version, they stumble around in front of an urban planet background (the first planet) or the hardly changing backdrops of desert, jungle or ice planets, until the player gets his hands on a key card which provides the coordinates of Cassandra to the navigation computer.

Cassandra is the real goal of the game. Our hero puts on his space suit and sets down his “Cosmoliner” for the last time. Although the ship's sensors classify this world as having no atmosphere, a last wave of nasty jellyfish is blocking the way, floating in whatever air. Massacring them, we finally face Genolyne. Various game descriptions found on the Internet call her an insect – although in reality, she is really shown metaphorically as a giant brain which needs to be extinguished in the final showdown. Just for the game to end on an anticlimactic note simply stating that you have won. 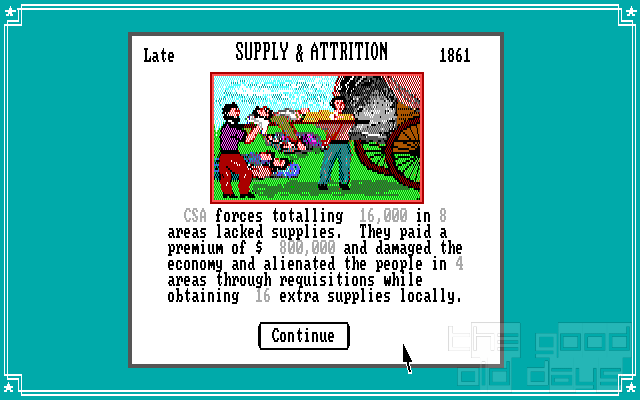