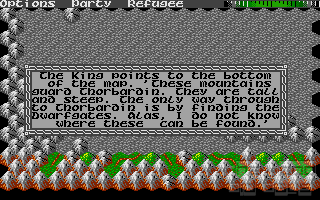 When SSI started publishing officially-licensed Advanced Dungeons & Dragons games in 1988, the “Gold Box” series came out swinging with Pool of Radiance, which made up for what it lacked graphically with a slavish recreation of the AD&D tabletop rules (including the availability in-game of pages of inscrutable polearms) and an engaging tactical turn-based combat system. The D&D game was no stranger to computer games, having served as the template and rules engine for the earliest hobbyist and even commercial CRPG titles like Ultima, Wizardry, and The Bard's Tale and had been licensed for “official” games in the past.

SSI published many games that were not part of the main CRPG line, several of which were set in the popular Dragonlance game world: War of the Lance, a classic hex-crawling strategy game; Dragonstrike, a “flight simulator” on dragonback; and the so-called “Silver Box” games developed by the UK-based U.S. Gold. These included Heroes of the Lance and Dragons of Flame, both side-scrolling action games that allowed a single player to essentially play through the story of the Dragonlance novels/tabletop game modules. The final entry in the trilogy was Shadow Sorcerer, which is based on the 1984 Tracy Hickman tabletop game module Dragons of Hope. This module was eventually novelized by Hickman and his Dragonlance creative partner Margaret Weis as Dragons of the Dwarven Depths in 2006.

Shadow Sorcerer picks up where Dragons of Flame leaves off: the Heroes of the Lance have rescued 800 slaves from the clutches of the evil Draconians and must shepherd them to safety. Unlike its predecessors, it is not a arcade action game, but neither is it a RPG in the traditional sense. Instead, U.S. Gold has attempted to do something new, daresay innovative, with this third Silver Box game.

The goal of the game is simple: you, as the Companions of the Lance, must keep your charge of 800 refugees safe, fed, on the move, and ultimately resettled in the Dwarven kingdom of Thorbardin, a place so mystical that nobody knows where it is. So, the perfect ambition, especially when you're in a hurry, as you are in this game.

The game takes place at two scales: an overland travel scale, implemented as a hex crawl, and a “tactical” map which is essentially a zoomed-in hex or dungeon room presented in an isometric format.

In the overland map, your party starts at the top of the screen and has to find their way to the bottom of the screen, which is presumably where Thorbardin waits. In the middle are unexplored roads, rivers, hills, and mountains that are cloaked in a fog of war until you enter an adjacent hex. At this scale the game proceeds more like a board game than an arcade game. Your party of 4 heroes (selected from a pool of 16 pre-generated characters representing the core Dragonlance heroes and a few “leaders” from the Refugee group) is represented by a single icon on the map and is the “game piece” that you move from hex to hex. A second icon, representing the refugee group and the dozen inactive heroes traveling with them, follows behind and a slightly slower pace.

Some hexes trigger an encounter, which shifts the game into its tactical mode. An encounter might be an interesting cross-roads, a roaming pack of monsters, or just some equipment laying in the road. On entering tactical mode, your four characters are represented by their own icons and are clustered in the middle of the screen, maybe even standing on the random gear that triggered the encounter. You'll have to move around to find out.

Managing equipment in Shadow Sorcerer sounds simple: you drag some item from the ground to either one of the four character portraits in the corners of the screen (to ready or use that item), or to one of the backpacks to store it. In practice, it's not simple at all. First, a character has to move next to the item. Then you have to trigger the “Pick Up Item” task from the character's “Command View”. Only then does a tiny window appear from which you can drag and drop the item. And like character inventory, this tiny window only shows a single item at a time, and you have to use arrow buttons to navigate through a pile of gear or a hero's backpack. No items have descriptive text so you have to decipher what things are strictly by their icon. Not so difficult for bows and swords, but there are mystery meat objects that might be a quiver of arrows but look like a bedroll or a ibuprofen caplet. A potion has indeterminate effects until it's quaffed by a character.

All activity on the tactical screen occurs in real time, but only one character can be active at a time. You might think to activate a character by clicking their portrait, but this does not select them; only opens their character sheet. Instead, you can use the keys F1-F4 to select a particular character or click their icon in the view, which selects them and opens their Command View from which you can Look, Talk, Move, Attack, Take, or Attack/Cast. Unfortunately, while you can pause the game, you cannot use that time to give or queue orders.

Combat proceeds in real time, and the clumsy command interface makes it difficult to effectively manage your heroes. You're better off using “auto-combat” and hoping for the best. Even so, poor pathfinding and inexplicably bad decision-making make encounter resolution an exercise in frustration. A quick press of the “F5” key puts all characters into auto mode (behaviors like “attack” or “flee” can be toggled on their character sheets) which will at least get them engaged with the enemy while you steer some specific ability. More than once, the heroes and villains have been completely cowed by some obstacle in the room, like a rock or pillar, and just stand there staring at each other until manually moved to a more strategic vector; or a melee fighter gets stuck behind the archer, incapable of stepping around the fellow. Easier to step over his corpse, I suppose. Better games than this have also had poor combat systems (Ultima VII) but between the inability to set commands during pause, poor pathfinding, and the occasional disregard for toggled behaviors (a character may flee or even stand still and do nothing when instructed to fight), Shadow Sorcerer has one of the worst action combat systems I've ever encountered.

Luckily, no heroes actually die. When reduced to 0 hit points they fall unconscious and you can find them later with the refugee group, having somehow made their way back. In the meantime, your party of four can be reduced by attrition, necessitating a retreat from some dungeon.

Like the Gold Box games, the accompanying manual includes so-called “Journal Entries” which are referred to at certain points in the game and are meant to provide long-form narration to support or flesh out game events. Unlike those games, the journal entries in Shadow Sorcerer are few, short (only 21 entries across 8 pages), and at times nonsensical.

At one point in the game, during an audience with a Dwarven King, he says “There is much you should know. I don't have time to tell you all now” and he “gives” the party Journal Entry 9 and says “read carefully.” Journal Entry 9 in the book is a transcript of the very speech that the King just said he didn't have time to give. Another event has the party accepting a map that refers to a Journal Entry, which instead of being, as you might expect, a map, is a short description of a map of a location that is subsequently displayed in-game.

Shadow Sorcerer is not billed as an RPG but as an “Animated Fantasy Adventure,” so you can forgive it its lack of many RPG elements. Characters cannot be customized, nor do they increase in levels or abilities during the game. Only four of the 16 playable characters have any spellcasting ability, and there is only a small selection of spells in the game, kind of the “greatest hits” of low-level D&D spells including Bless, Cure Light Wounds, Magic Missle, and Fireball.

Shadow Sorcerer features a musical score by The Fat Man (George Sanger) that plays through the intro and during overland travel using either Adlib or Roland MT-32 synthesizers. There is no musical accompaniment for the tactical view, so dungeon exploration is silent.

U.S. Gold seems to have wanted to blend the gameplay of a strategy game with the action of a console RPG (the tactical mode and dungeon exploration in particular seem to be going for a Zelda-like feel), but the poor control scheme and terrible combat ruin whatever innovation with which you might otherwise credit them. Built for replay, I'd be surprised if anyone finishes it once. SSI did not publish any more Silver Box games from U.S. Gold after this title.