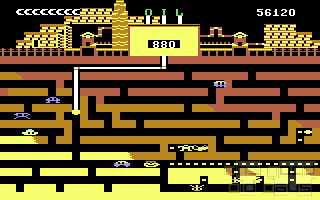 When it comes to oil, who thinks of deep holes and long drilling shafts? Oil is also called the black gold and you often have to dig as deep for it as for real gold. With a little luck, a real drilling professional will eventually come across a well and become fabulously rich.

Our oil refinery is already waiting at the top of the screen. With the drill head, the drilling shafts are combed for small spots of so-called oil pellets. Only after collecting all points, the screen spanning level is finished. There are also all kinds of vermin and monsters in the underground which grapple with the long pipeline. They take one of the 3 lives from the player when they touch the drill pipe. The only way to counteract them is to get ahead of the monsters and touch them with the drill head. This will make them disappear for a while.

The exciting thing is that the little monsters follow their own – always horizontal – paths. The given drill shafts, on the other hand, run in different directions and nested branches. Intercepting such a freely moving monster requires a certain amount of foresight and skill from the player in controlling the drilling arm in the tunnels. The arm can be retracted at any time by pressing the fire button. Like a snail into the shell, because in the starting position you are untouchable. The danger increases the deeper you get into the tunnels, because the grab arm is easy prey for the numerous attackers.

The frequency in which the opponents visit the playing field can be set in three levels of difficulty at the start of the game. In addition, the speed of movement of the monsters increases after passing all 8 levels for the first time. In this respect there is no limit to the player's ambition. But rest assured: to get further than level 4 without cheating is really only possible for very talented players. Although there is an extra life in store for you after collecting 10,000 points, these are sometimes gone faster than you can move the joystick.

Also worth mentioning is the oversized oil pellet in each level which briefly slows down the movement of the little troublemakers, so that the forward-looking player can also break down the very lower layers relatively undisturbed during this short phase. In addition, there are flashing goodies rushing through the game field: goblets that only bring points and do nothing else. But beware of landmines: they destroy the drill head when touched, but leave the pipe undamaged. And before I forget to mention this: …there's a time frame for all this. At the top of the refinery, the countdown is counted down from 999. Hesitant players lose a life after the countdown.

The implementation for the C64 is professional and very playable. The controls are easy to handle. The game scenario is graphically simple, but functionally implemented. By variable difficulty levels also different types of players are addressed: from casual gamers to professionals. The learning curve increases continuously: the last level is a real maze.

So a real hidden gem? Are we all rich now? I, for one, remain rather realistic. I find it difficult to identify with a mechanically extendable gripper arm. The combination of path planning and quick reaction is unexpectedly demanding. The game is great concerning the idea, but has no intuitive game flow like the similar maze game Pacman. That's why the fun factor doesn't reach the player as directly and spontaneously, but develops rather toughly like oil and the motivation quickly trickles away. 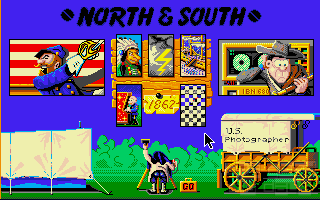