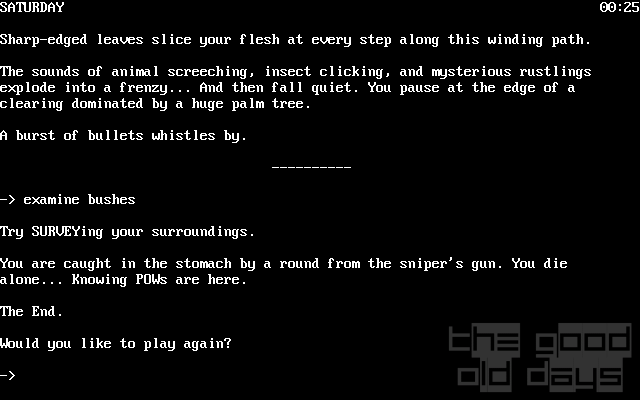 …the Oscar for the most far-fetched use of a mega licence goes to: First Blood Part II!

The insignificance of the computer game industry compared to more established media in the mid-80s is illustrated easily by Angelsoft's licencing deals. They managed to score at least three of the biggest movie names of the time: Indiana Jones, James Bond and… Rambo – whose second part, in retrospect, has turned out to be something like the pinnacle of the politically ultra-reactionary body cinema so popular at the time; a movie which spends 85 of its 96 minutes with restless shooting. What better way to adapt it than a text adventure?

The weight of the licence doesn't exactly crush the final game, but the latter never even attempts to emancipate itself from its source and build up its own identity. The player's task, taking the role of John Rambo on a rescue mission in Vietnam, is to re-create a handful of central movie scenes. Leading to two issues in gameplay terms.

First and foremost, Rambo's main activities of the movie don't exactly lend themselves to imaginative puzzle design. The game's main task is finding hidden traps and recognizing ambushes in order to disable them. Meaning each screen is waiting to be searched, something well established by the classic treasure hunt genre. As soon as you spot something, you point your gun at it and pull the trigger. Problem solved. Along the way, as soon as the randomly patrolling helicopter turns up, hide quickly and if a random guard shows his face, shoot first.

Second, the movie not being exactly recent anyore, coming to some solutions is virtually impossible without prior detailed knowledge of the same. Some parts can be solved through trial and error (as stupid as this may be), others… not.

In this way, being caught and tortured when entering the prison camp is something which cannot really be anticipated, but it's alright. The knowledge of better eating something beforehand can be gained through failing and dying once. Though where to get food? The in-game solution is completely trivial, but there is absolutely no hint to be found. And then, how to survive the torture scene? Is there a tricky puzzle to open the bonds and overpower the bad guys? No, the scene unravels by itself if you simply manage to survive long enough – but the exact command to get through, you have to learn from the equivalent movie scene, please.

If, thanks to movie knowledge, you manage to reach the ending, your arms will go up, but not in triumph, but in disbelief. This was it? Effectively, this First Blood Part II doesn't last 96, but rather ten minutes if you know what you have to do. Game time and difficulty – disregarding need for extrsinsic movie knowledge – is only derived from random elements. Not every location offers a suitable hiding place. Helicopter surprise in the wrong place means game over. Likewise, if a random enemy soldier turns up and you don't have your weapon ready already.

The writing is not on a level which would maintain motivation by itself. Functional brevity probably best describes it. Characters are – in the way of the source material – paper thin and the plot (plot?), which is basically constrained to the opening and closing texts, is intrinsically incomprehensible. Enough words have been spent on puzzle quality already.

What should be the source for motivation of trying repeatedly after failing? The only thing which comes to mind is the association with the movie theatre visit, which at the time did blow the mass audience away, admittedly. Today, in our not less militaristic, but nevertheless changed times, First Blood Part II (the movie) is a bit of an embarrassment. Even the remaining fans probably only watch it with a semi-ironic perspective now.

To this effect, Angelsoft's First Blood Part II doesn't have any real meat left. Though I think we can safely assume that none of those involved in making it at the time were really trying to build a lasting masterpiece…