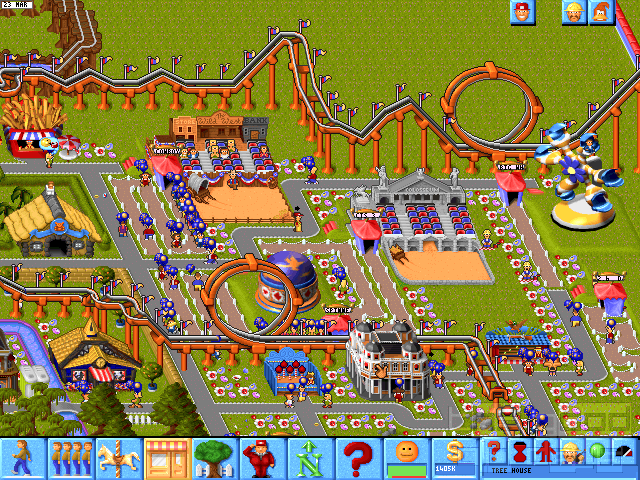 Your rich aunt has just died and you are her heir! Overpowered by joy, you go out to tell off your boss. But then you notice a silly sidenote in the testament: You are only allowed to spend the money on building Theme Parks, and the profits can only be spent on additional parks. So you give in to your fate (you can't go back to your old job anyway after what you've done to your former boss) and start planning!

After setting several things like the difficulty level, you're taken to a world map. Here you can choose the location for your first park. But you don't really have much of a choice as the only decent and affordable place is England. The Antarctic would also fit to your financial situation, but the number of potential visitors is not too high there. Later, you can also open parks in all the other parts of the world!

No matter which country you chose, the amount of land you get is always the same. It's a flat square which ends with a fence. In this area, you can fulfill your dream of a working park. Visitors arrive via bus and go straight to your main gate. There they have to pay to get in. But that's not the last time you've seen some of their money! While all the rides are free, you only build them to attract visitors and keep them happy, i.e. make them stay, most of the money is made with the shops you've (hopefully) built.

Each visitor's needs and mood are constantly recalculated individually. So if he's happy and he sees a gift shop, he'll be more than willing to buy your overpriced crap. If he's hungry, he'll go to one of the fast food temples or restaurants. You can set the prices for everything sold in the park. Every visitor is buying a baloon? Why don't you make them a bit more expensive then? Maybe this dumb cattle won't even notice - hehe.

But there's also another customizable component in some shops. How salty should the fries be? Better make it much, so that they get as thirsty as possible. Oh, what a surprise: just next to it you can buy cola... This is a pretty obvious example. But what about the amount of coffein in the coffee? Or the fat in the burgers? The water in the alcohol? Find it out for yourself!

You also have to manage your staff. This consists of cleaning people who collect the trash and remove the vomit stains from the ground, mechanics who repair rides and entertainers who entertain (oh really?) bored visitors. Depending on your difficulty level, there are also some more options (or not

. For example, you don't have all the rides and shops from the beginning but you have to research the more advanced things. Another field you have to spend money on. Or you have to make sure there are enough stocks of food to satisfy the needs of the customers. Not to forget the stock market where you can buy the opponent's parks. Oh, and of course negotiations with the labour unions, including strikes.

So Theme Park can be played as a simple sandpit-game, but also as a serious economy-simulation. It's something for everyone! The only negative aspect is that it lacks a bit of change. Most of it becomes routine after some time. But until that happens, you can spend many weeks with it! 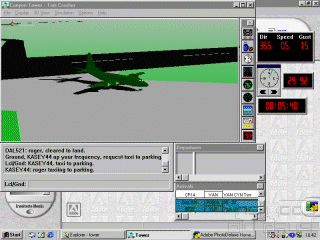