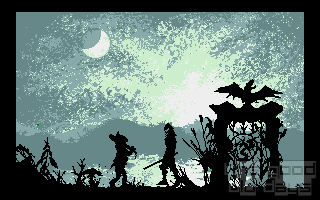 Evil guy (answering to the delightful name of Murk) threatens the world, big guy with a large sword sees it as his duty to stop the madman… you know the drill. Nevertheless, Blade Warrior may not be quite what you expect at first glance. Although the first glance makes it look quite interesting already, doesn't it?

The main, instant draw obviously being the game's graphical style. The heavily parallax-scrolled scenery, tinted all in shades of one colour (depending on the current stage), with its slowly shrinking moon indicating how your time is slowly running out, with lightning occasionally illuminating the sky accompanied by thunder booming from the boxes is only overlayed by black silhouettes. All the foreground, objects as well as player and enemy sprites are shown this way. It makes for a moody effect which works even to this day – a style which has aged quite well.

It further helps that monsters have been picked to fit this style quite organically. Giant spider-like creatures crawl along with their swinging legs, shambling mummies pop out of the ground, small winged demons flutter around. Variety isn't half bad and in spite of only relying on outer shape, the enemies are all very recognizable.

The downside being that they don't behave in clearly distinguishable ways. The variety remains on the surface. Which brings us to the gameplay side of things. Now I may need to disappoint you, as given the way this review went so far, you are now clearly expecting a beating along the lines “style over substance sucks”. In fact, Blade Warrior tries quite a few things in the substance department as well.

First of all, in spite of looking and mostly handling like a regular beat 'em up, the game is actually non-linear. Stages can be traversed in various ways, with gates interconnecting them or if you find one of the magician's towers, you can ride a dragon to travel to the next one in a nice flying stage. Unless you let yourself be brought down by enemies, that is, which may make you crash land in a particularly nasty area if you are unlucky. The towers also fulfil other important functions, as their owners are able to provide magical items which are necessary to end the game, though of course, they will not just give them away for free. Rather, they expect to trade them against other artefacts which need to be found first and which – until traded away – can be used to boost your own powers in battle. Also, magical spells can be mixed from other items picked up along the way, which also make for particularly powerful weapons. Some gates need to be opened with special spells or other means, so the game does perform the necessary gatekeeping to guide the player at least a bit.

This overarching goal of locating and procuring the artifacts to beat the bad guy even put an interesting spin to the fighting. It is actually not necessary and often not even advisable to engage all the enemies. More and more will spring up anyway; seems there is never a shortage of supplies. Getting where you want without being killed is the task at hand, and running away is often a viable strategy – though careful not to be surrounded.

So, with all those gameplay and presentation ingredients, it looks and plays like a winner, right? Pretty much, but a number of details prevent overall classic status anyway. Fighting, in any case the core activity, is just too simplistic. There are only four swordfighting moves available to the player, and those aren't even animated that well (in a game whose appeals relies strongly on graphical effects no less). Enemies are not solid, so it is possible to just walk through them. Even the graphics take their toll, when for example it becomes hard to tell what is irrelevant scenery and what are relevant objects. Finally, there is no real way to measure overall progress. It's a fairly long game and it's sometimes really hard to tell if you already got anywhere.

Blade Warrior is a game which tries to impress with production values. Unfortunately, exactly those aren't quite a slick as they should be. It's a well produced game, but not an excellently produced one. At the same time, the added gameplay complexity compared to similarly visually focussed games (*cough* Shadow of the Beast *cough*) may actually work to its own disadvantage in this age of short attention spans, as it requires more dedication and attention to really get into it. Which may be worth it for a change, but it's not a completely safe bet.

Mr Creosote:
Originally posted by Moebius at 10:44 on December 19th, 2019:
This is marvelous. I always loved games with a unique flavor like that. Yes, I've seen this page before, though, I have to admit I didn't really read the original contents. Maybe it's a good thing after all

The original review can still be found in the archive article if you like to have a look.
Quote:
Quote:
may actually work to its own disadvantage in this age of short attention spans

The mainstream public is as it is. The game is as it is. I'm just making a neutral statement about the compatibility of both

This is marvelous. I always loved games with a unique flavor like that. Yes, I've seen this page before, though, I have to admit I didn't really read the original contents. Maybe it's a good thing after all

Quote:
It makes for a moody effect which works even to this day – a style which has aged quite well.

I'd prefer the word melancholic

Quote:
you are now clearly expecting a beating along the lines "style over substance sucks"

That's actually what I thought when I watched a few minutes of the gameplay a couple of years back, though I still appreciated the attempt at least

Quote:
Even the graphics take their toll, when for example it becomes hard to tell what is irrelevant scenery and what are relevant objects.

Ah, that's actually one of my favorite things, love being confused a bit

Quote:
may actually work to its own disadvantage in this age of short attention spans 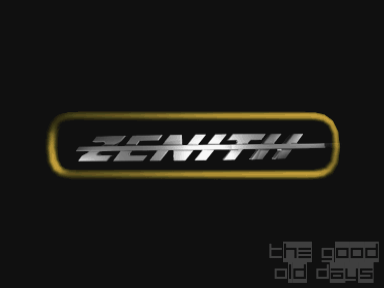