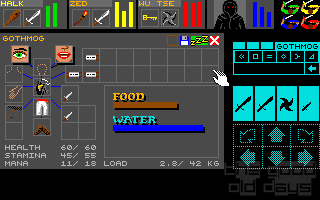 If there ever is a list of computer games that changed the world of gaming forever, Dungeon Master would figure prominently on the top, among such classics as Civilization and Doom. Dungeon Master was not the first roleplaying game to be viewed from a first person perspective; that honor goes to Akalabeth by Richard Garriot. It wasn't the most difficult game, either. However, by combining a very unique spell casting system with real-time combat, unprecedented graphics and awesome sound, the game managed to create such an authentic atmosphere that only Ultima Underworld, many years later, was able to match it.

The story is simple. The White Wizard, the lord of order, has asked you to incapacitate the Lord of Chaos, so that he can merge with him to create the Gray Lord. The trouble is that the Lord of Chaos resides on the bottom floor of a 12-level dungeon, filled with nasty traps and even worse monsters. It is up to your party of four to survive the dungeon and approach the Lord of Chaos.

You start out by selecting your characters. There are 24 characters to choose from, from several races, both gender and classes. In fact, all characters are multi-class characters, or at least have the potential to become ones. There are four classes in the game: a warrior, ninja (more commonly known as ranger or archer in other RPGs), priest and wizard. What really set the game apart from others (and made it possible for your characters to advance in each class) was the leveling-up system. Instead of gaining experience points, your characters improved their classes as they used their skills. Bashing away for a while increased the warrior level, but the same character could mix healing potions as well during times of rest, thus increasing his priest skill.

What made the game the cult classic that it is today, however, was the technology. The graphics were better than anything I have seen until then, and were never truly copied by the game's clones for years to come. The game was presented in a first-person view, and even the fact that it was step-based (a system I still prefer) didn't detract from the authenticity of the graphics. The textures were very plastic: stones felt like real stones, you could almost feel the texture of wooden doors, and the monsters were animated and moved in real time. However, the thing that really added authenticity to the graphics was the lighting. The amount of light varied by how much your torch was burned down or what power of light spell you used. All the time, the graphics were very appropriate to the level of light, even going as far as decreasing your sight distance with decreasing lights.

The sounds were superb as well. If you were lucky enough and had stereo speakers, you could fully enjoy probably the first effective usage of directional sound in the game. The sound volume varied, depending on the distance from where the sounds originated, and the direction always told you what to expect behind the next corner. This combination of sound and graphics made Dungeon Master the first game where I got scared when playing in the middle of the night, in a dark room.

The interface was above average as well, even though here I do have one gripe. The good thing about the interface was that you had a choice of four languages (not that there was much to read), and that it not only supported a mouse, but also allowed you to combine keyboard keys with a mouse-based interface. However, the one thing that I found a little disturbing was the food and water consumption. The first few times I played the game, the lack of food was a worse enemy to me than all the monsters combined. Only later I found out that standing on certain places generated more enemies that I could kill and eat. Before I knew about it, the game was a little too hard.

The one thing about the interface that really stood up (and deserves its own paragraph) was the magic system. The magic system used here was first introduced in Wizardry I, as a way to differentiate itself from other games, but with no real value to the gameplay. Under this system, all spells consist of several runes, which you need to combine to create the desired effect. While the only advantage to this system in Wizardry was the fact that you could experiment with different combination, it was the real-time environment in Dungeon Master that made the magic system so unique. Imagine yourself being chased down the corridor by a pack of monsters who already severely wounded your warriors, and frantically clicking on various runes to create a powerful fireball. It required not only the concentration from the player (as opposed to some generic “concentration” statistic), but also the careful assessment of the spell-caster's capabilities. A too strong spell, while offering more benefit, had a larger chance to fizzle, especially for a weak spell caster. Thus, using magic became exciting for the first time in the history of roleplaying, and I can think of only two games that achieved the same effect ? the sequel, Chaos Strikes Back, and Arx Fatalis thirteen years later.

As for the gameplay, it was simply superb. Dungeon Master introduced a whole host of unique, hard but very logical puzzles. Some of its platform-hopping puzzles were so hard that I ended up dying of hunger before I found the right combination. Other puzzles required certain items, and while they were so logical that I had to scream “Of course!” when I found out, sometimes it took me hours upon hours of thinking.

Replay value was probably the weakest point of this game. Due to the fact that Dungeon Master was so unique, we kept replaying it over and over again, having nothing else to play. However, if the game faced any viable competition, we'd play it maybe twice before shelving it and possibly playing it a few more times in the future. The dungeon was very linear, and by the time you hit the really challenging levels, all your characters were at roughly the same level. Due to the lack of any high score list, there was no point of trying to beat your best score either, and so after completing the game once or twice, it would have become nothing but a short-term distraction, were there any competition.

Overall, however, Dungeon Master was probably the most revolutionary game for the roleplaying genre. It introduced the player to many unique puzzles, the first visually pleasing and incredibly authentic first-person dungeon. The sound, overall gameplay and a very powerful mix of puzzles and monster encounters made the game as exciting as you could wish for. Until today, the game has been rarely matched, and never really surpassed.

This has to be one of the RPGs I tried playing the most – without ever finishing it. I think the farthest I got was level 3 or 4 (I vaguely remember fighting some mummies?). There is something about it that keeps me coming back… yet there is also something that always puts me off.

It is also a game I only knew for the longest time by stories from a good friend back in school. One of those games you get told a lot of stories about and get your very own image of how it must look and play like. Maybe it is the discrepancy between this and the actual game that is still letting me down after all those years.

Big Alex:
Couldn't agree more - quite possibly the greatest game I'd ever seen on the Atari when it came out
NetDanzr:
Feel free to share anything about Dungeon Master (1989) here!
[Reply] 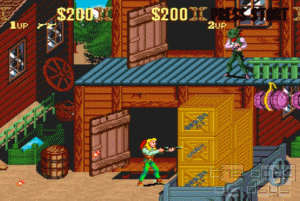