The Lost Tribe
for PC (DOS) 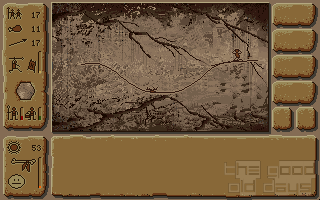 Suddenly the mountain where you, along your tribe, lived exploded. Lava and stones covered the village, killing the chief and his best hunters, and creating a wasteland where the village was. The elders have chosen to find the home of the ancestors, and you will have to guide them through one of the six paths to your objective. But the ways are dangerous and a bad chief isn't forgiven.

To make things worse your tribemen have no idea about hunting, their main way for getting food, and not precisely a reliable one. It can, more or less, be solved training and carving animals images. But it won't be enough, through a bad hunting region your skill won't make things much better. If the things look bad, or for covering your back, you can always put some people to forage, better eating little than famishing.

Luckily there are explorers to make things easier, better said, you can send a few tribemen to explore and know before going how is the terrain, but it will take them a day, an unproductive day for them as they will still need to eat. Sending them will not only show you how much food is there, also you will know the degree of danger, going through dangerous terrain may mean a death or loss of food. If you are lucky maybe an ancient settlement will appear in your way, giving clues about the distance to your destiny, or teaching how to hunt better.

More usually what you will find is a problem. A still image and a few paragraphs will show it, ending with a few given options to choose. Act wisely and things will go better, do wrong and your status as leader will go down. Losing the consideration of the tribe, or keeping the people hungry for too long, will make them banish you. Things can always be improved with the feasts, if you had a good hunt; or carving venus statues. But there is a third, unsolvable way of losing, take too long to reach the new home and winter will come.

This is a somewhat special game, but I will try to explain better. It could be called a strategy game, you have a map of hexagonal pieces and should plant your moves through it. But really it consists on the control and live of a nomad tribe. At each section you will find only a level of food, really there are two, one for hunt and one for scavenging, which affect at the quantities of food you can get. Also each region has some animals, and lacks others. Contrary to the common belief, mammoths can't be found easily at mountains, there you will do better hunting cave bears, while on the coasts or shires of lakes it will be a good place to hunt fishes. Go after the wrong animal and your tribe will feel stupid.

That is basically the most important part of the game, without food there is no tribe. But once you get enough you will have to travel, until you have to hunt more, that is one or two days. And this way you have to find the mountain that will serve as a new home, with some scenes, very similar to the ones of Castles, which will appear after any action to make things more entertaining. A few paragraphs telling the situation a bunch of possible solutions, normally three, from where to choose.

It should be noted that the game, fun but staying believable enough, is an educative one. You won't notice it easily as the things are done right. It is, before anything, fun, and in second place shows how a prehistoric nomadic tribe lives, always depending of the food that may, or may not come. 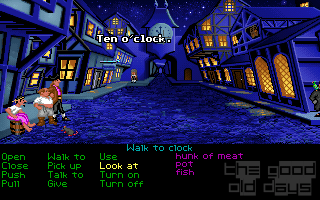