Day of the Tentacle
for PC (DOS) 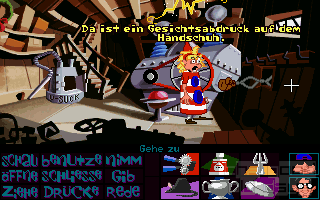 Look, behind you, a three-headed monkey! Wrong game, wood-lover. Anyway, you know, in spite of Monkey Island, it was Maniac Mansion which catapulted Lucasfilm Games to fame. Fast forward a few years. The company is now called Lucas Arts, and the lead designer of Maniac Mansion (as well as Monkey Island) has left. Time for the long-awaited sequel.

Neither protagonist Dave, nor his girlfriend Sandy make another appearance. After all, it was the Edison family which really engraved itself into the public consciousness. In addition, one of the optional characters of the first part, Bernard, is put in the top spot. He's assisted by his friends Hoagie (an overweight wannabe rock musician) and Laverne (a medicine student presumably on drugs). They receive a note from Bernards friend Green Tentacle asking for help. Apparantely, Purple Tentacle has sipped on the sewage of Dr. Fred's atomic mud machine. That made it super smart. Being evil, the goal is obvious: Ruling the world. 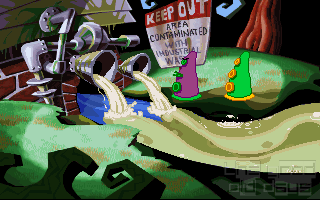 Arriving at the Edisons' villa (which has been transformed into a third-rate motel), the three protagonists meet Dr. Fred who suggests a simple solution: Using his time machine, they should go one day into the past to prevent Purple from getting the IQ boost. How could it be any other way: Things go wrong. The cheap giant diamond replacement Dr. Fred has used to power his machine breaks, catapulting the three into different directions in the timestream. Hoagie lands 200 years in the past, Laverne 200 years in the future (where the tentacles have already taken over) and Bernard falls back to the present. The goal is still the same: Preventing the future in which Laverne is trapped from ever happening. Only that this task has just become even harder.

After three pretty much perfect Adventure games in a row, the expectations couldn't have been higher, and Day of the Tentacle delivers almost on every count. The mostly non-linear gameplay lives from the excellently made interactions between the timezones. Regular objects can be sent through time using Dr. Fred's time travel cabins, so you often have to pick up something, send it to another characters and use it in a completely different context. Some objects, as well as living creatures, can't just be sent the regular way - which doesn't mean you don't have to find a way to get them into the respective futures as well. The latter are probably the most inventive puzzles of the game.

Not a bad word can be said about the cartoony graphics. Hard to believe that this is still the same screen resolution used in Maniac Mansion! As for sound, there are two versions out there. The original floppy version has spoken dialogue only in the intro. That one has (at least in the German version) horribly unfitting voices. A few months later, a CD version with fully recorded dialogue was released. For that, there had been a real casting apparently - yet another 'excellent'. 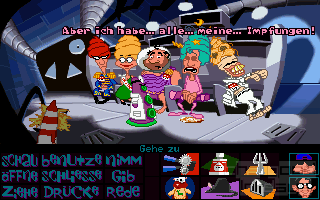 The same can be said about the story and the dialogue. I can't claim to understand every joke made about John Hancock, but with such a high joke ratio (and the styles ranging from worldplay to purely visual slapstick), some misses just don't matter.

A few paragraphs earlier, there was the word 'almost'. Tiny, easy to miss. Yet, it was there for a reason. So, at the risk of being skinned alive, here it comes: Day of the Tentacle is too easy. Although, as mentioned before, the puzzles are logical, inventive and imaginative, the controls make them more shallow than necessary. On the surface, the same SCUMM version used since Monkey Island 2 is at work here. However, you do remember those right-click auto-selections for each object? It's used too extensively here. 90% of the time, you just need to right-click on everything, and the game will automatically select the correct action for you. Of the nine verbs (which is already few), most are never needed anyway. For example, 'using' an object with a person triggers the same as 'give' - so why have the latter at all? You get the picture.

Now, there isn't an objective barrier of where it gets too simple or too complex. However, it's strange for sure if a game doesn't even use its own system! Other companies had already begun experimenting with different incarnations of the dreaded one-click-does-everything controls which took over the genre soon after this. And this was the reaction?

Day of the Tentacle plays excellent enough just as a mad cartoon running smoothly pretty much on its own. And seeing what kind of 'non-interactive games' were released in the following years, it's still far from that puzzle-wise. Still, in retrospect, this is a kind of 'beginning of the end' - the day the market leader gave up. Bitter, but very sweet.

DesertFOX:
Day of the tentacle, or DOTT (as I recall) was one of the coolest adventures I have ever played. If you have never played it... I highly recommend you to!
Moebius:
Without a question, one of the best Lucas Arts games ever. Personally my favorite along with Loom. Quite a picturesque, lengthy and ingeniously well-plotted adventure. Not to mention great humor and moderately complex tasks. Believe it or not, this one game i played through all by myself without peeking in walkthroughs or anything. However, it doesn't mean it's a piece of cake, you may get stuck for quite a while in the game, but somehow eventually it would always suggest a possible way out. Solid 6 from me, for the overall undisputed wholeness comprised of great graphics, amazing storyline and decent length.
Mr Creosote:
Feel free to share anything about Day of the Tentacle (1993) here!
[Reply] 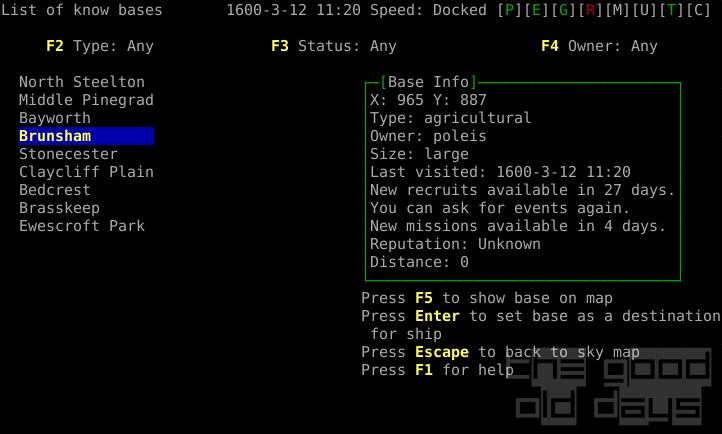