Dogs of War
for Amiga (OCS/ECS) 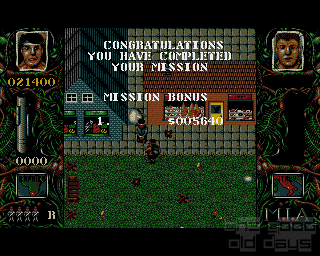 Steve Bak had already ported both Commando and Ikari Warriors to the Amiga for Elite, and apparantely building on that experience, he followed that up with his original creation Dogs of War. The use of 'original' in the previous sentence being limited to the meaning of 'not being a conversion', because Dogs follows Commando's footprints very closely, but it has become a minor classic on its own right. 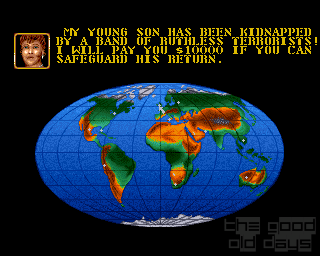 You take over the role of a Rambo-type mercenary (who even looks like Rambo) who has to fulfill twelve missions all over the globe. These missions are usually motivated by your employer requiring to have something brought to him or her, be it a kidnapped son, a drug baron or even a nuclear missile. To get there, you have to walk past hundreds of evil enemies, mowing them down on your way.

So, not exactly brain fodder, but nobody expected that... or did you? A nice feature of this particular game is the non-linearity of the missions. You can select the order in which to take them, so if you're stuck in one, this isn't the end - just work around it for now and you can still see all the rest of the game. Also, you get paid a different amount for each mission, and that money is usually spent on acquiring bigger guns for the next one.

The weapon store has quite some selection there: simple handguns, automatic rifles, big, fat machine guns, hand grenades and even small rocket launchers / anti-tank weapons. You can take as many weapons on a mission as you like (and as your budget allows, obviously) and switch between them at any time. Firing frequency and range can differ significantly from model to model, influencing the mission's difficulty enormously. And before you just take the minigun thinking it's the best anyway, think a moment about the downside of this fast firing: ammo consumption - bad for your wallet, and high risk of running out of it mid-mission.

These things really work for the game. On the downside, it is really hard. Of course you can try ducking behind obstacles to be safe from enemy fire for a second, but even then, you have to watch for grenades to come flying. And even though the enemies are usually very dumb (they never really seem to be after you, but rather following a pre-defined movement pattern), their high numbers more than make up for it. To make things a little better again, you can take along a second player, and thankfully, the game won't let you kill each other in the heat of battle (unless you're using the flamethrower...). 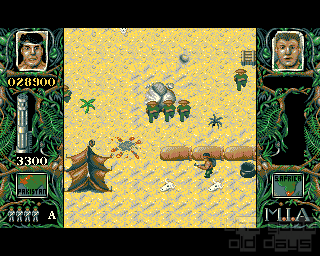 Weapon management in the middle of the battles could also be a lot better. Due to the single-button nature of the common joysticks, you have to resort to the keyboard to change your weapon. When an armed vehicle comes charging at you, you hardly have the time to jump out of the way, though, let alone cycle through your arsenal until an appropriate launcher comes up and use it. And talking about vehicles, you unfortunately never can jump into one and control it yourself.

In the audio-visual department, the game may not look too impressive for Amiga standards, but in time, you'll start to appreciate the small sprites - better overview. The music is standard fare, and most of the time you'll hear the rattling of guns and death screams anyway.

In the end, Dogs of War delivers what's expected. Obviously, this is a very limited genre, so even small things like the mentioned ones or even the scrolling changing direction (vertical / horizontal) from time to time make for a welcome change. On the other hand, especially in such a limited genre, any omission (driving vehicles...) is twice as painful. If you've got a second player at hand, this one certainly is the right game to waste a few hours with. 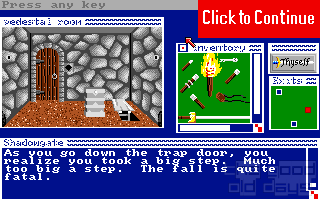