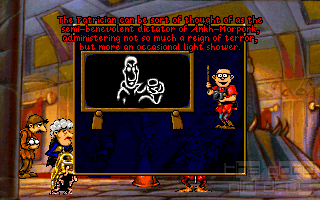 Talk about a high profile project - a Discworld computer game. Such cult favourites always run the risk of offending the very dedicated fan base, especially since presumably the computer games market overlaps very much with the group of those fans. First impression: They did very well. The graphics look very Josh-Kirby-ish and the CD version features professional actors as the voices of the characters - with Eric Idle in the lead as the wizard Rincewind. 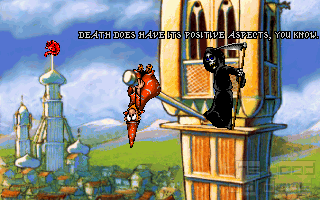 First things first, though: The game concerns Rincewind taking care of a dragon who is pestering the city of Ankh-Morpork. Dragons don't actually exist on Discworld. That is, unless people believe in them. This particular one has been summoned by a shady brotherhood which seems to be up to no good. Obivously, it is hard to get help with this, since people would have to be convinced of the dragon's existence first - which, in turn, would only strengthen its existence again. But with people and houses being burned, what else is there to do but to believe?

Played in classic Adventure tradition, Rincewind and his companion Luggage travel all over the world and even through time, meeting lots of strange characters and, of course, solving a lot of puzzles. Indeed, the puzzles seem to be the most common point of criticism. Completely unlogical, absurd etc. I'm glad to report that this isn't really a justifyable point of view. If anything, there are a few cases of typical Adventure-game 'backwards logic', i.e. the game requires you to commit actions which make perfect sense, but only after you've done them - because you get the motivation / explanation what they triggered afterwards. Mostly, the puzzles are just fine and even make sense if you get into the spirit of Discworld. 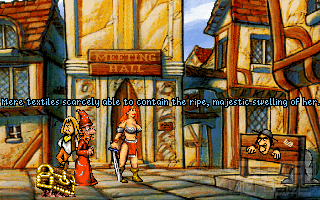 One thing which can be criticised is the over-abundance of the “That doesn't work” syndrome. Instead of using those chances of the player trying something out for additional jokes, most of them are wasted with the dreaded line. Even if it's Eric Idle saying it, it gets annoying after a short time.

Talking about 'Eric Idle saying it', the game is unfortunately, quite buggy. The farther you progress, you will encounter technical problems more and more often. Lines are sometimes not voiced at all, some are spoken by different actors or voice and text are saying different things (late script changes?). The German floppy version I played when the game was new couldn't be finished at all due to a bug which had a character simply not appearing when it had to.

Although that has been patched in the last 15 years obviously, even with the latest patch, the English CD version I played for the sake of this review still has some severe problems at the end. The finale had objects which I hadn't even picked up yet appearing in animations, the Rincewind sprite disappearing amongst other things. The game is finishable, but be prepared for some strange things to happen. 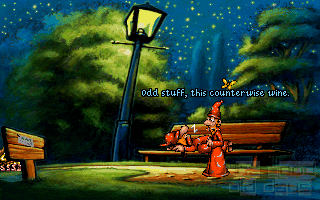 It is, of course, one of the basic questions of game reviewing whether to 'punish' a game for such things. In this case, I guess it's bad enough to mention it, but it isn't bad enough to spoil the enjoyment of the game. It is unfortunate that it was obviously rushed out and these issues were apparently never fully fixed. Then again, the game is quite a long one, putting the occurences of technical errors into perspective.

So, in the end, Discworld is highly recommended to anyone with an interest in humorous Adventure games of the chatty type. In typical fashion of the time, the puzzles aren't what keeps the player occupied most of the time. It's rather the dialogues which you'll spend most of your time with. If that appeals to you and if you see something in a sword which goes 'ping', you can't go wrong.

Yet all I remember right now about it are drawn out dialogues which might be fun to read but are dull to listen too, a semi-good German localisation (with lots of translation errors) and puzzles which became the epitome of "moon logic" to me. Oh and to top it off: Never close any of the location, but introduce new elements to each of them on regular basis, so you always have to search them all over again. Hooray!

Only saving grave to me: "Stimmt's Lachi?!" and "Nix mehr Lachi!" is still a running gag in my family.