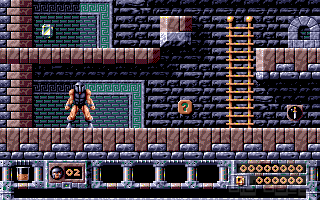 Being a demi-god might sound like a great thing, but it's far from being holiday at the beach with ambrosia and hot young priestesses swarming around you. In fact... it's hard work! After all that demi-god status is somewhat annoying - annoying in the sense of... why only demi-god?! We're talking about a great hero here after all - you! So, off you go to achieve the status of a full god.

Of course there's several monsters, puzzles, ladders and all that between you and your goal, but can that hinder a demi-god like you? Of course not!

Zzzzzap - a jump in time for about 2.500 years: We're not in ancient greece anymore, but somewhere in northern germany. It's sometimes in the early 90s and here's... me. I'm standing there with my friend Frank and maybe Miguel. One of us just got his hands on the new Bitmap Brothers game. It looks great, plays great - it just IS great. There cannot be another opinion - it's a BITMAP BROTHERS game after all!

And well, being older now, wiser maybe - and of course having seen lots more games I would still rank this game very very high. It's probably best described as an extremely good looking Jump 'n Run with adventure elements. It's not “run through it, shoot everything that moves” (which of course also is adviseable), but also “collect things on the way and try to use them”. And it's not like just pulling every lever you find would do the trick - often you have to go back to put a lever back, to use an item somewhere and so on. Of course it's not a fullblown adventure - the game's center is the action-elements. No question there. But it's just... more.

The game manages to create a great atmosphere right from the start. It's neither too easy nor too hard - you can usually push your way through many of the obstacles in your way, but usually there's also a way around them without getting hurt (and in the long run that's the path you'll want). You just have to think and try out some things. Nice about it is, that the game gives you hints in which direction you should think every now and then.

If you're even remotely into this type of game this one's a definite must, you'll hardly find a better game in the Jump 'n Run category.

I love this game!:D
It's one of my top 10 favorites of old games.
I spend hours to to figure out all the hidden secrets and I found them all.
I was shocked when the first time I played it trough completely that it restarted at the very beginning.
But then it was in some kind of hard mode.
But it a lot of fun to play it any time and the simple but beautiful graphics are timeless. :-)

This is one of my favourites and definitely on all my retro machines. Why? Because of the slow pace. You move slow and can focus on the quests and try a hundred times to reach this one specific platform. The riddles are more or less like: pull lever here, push button there, but if you find another secret treasure you will be happy. Also I remember this game as a fair one. You have a couple of chances to gain extra-lifes before beeing confronted with the end boss.

First played: 1992 on an STe, later on my 486DX40
The game review was in my very first issue of a self bought computer games magazine, the german Power Play.

Elwood:
Feel free to share anything about Gods (1991) here!
[Reply] 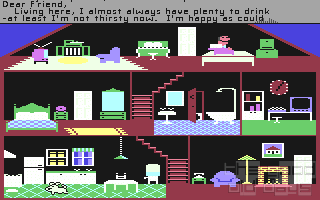