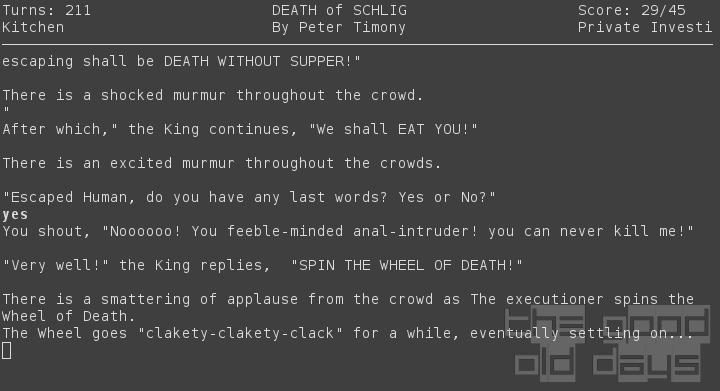 Schlig is working at the meat counter in the supermarket. What he really wants to be is a detective. He gets his chance when he is kidnapped by aliens who take them to their planet to be eaten. First, they want to fatten him, though. Messing with his DNA, what they achieve is giving him extensible and retractable eyes.

So the goal is to escape, using the protagonist's newly acquired superpowers. Although this is a game of life and death, the tone is zany and light-hearted. Even very silly at times, but in a good way. The best lines are those which contain some basically more serious stuff, which becomes completely insane due to the context. Bonus point for the kitten puzzle and its parser reply!

Talking about puzzles, most of the game is well hinted and imaginative, but not obvious. Solvable if you are able and willing to play along with the mood presented by the game. So the right level for an IF Comp game. What gets a little annoying, though, is the seemingly random appearance of guards who will capture you and therefore disrupt your plans each time they appear. The scene in the throne room which is triggered by being caught is, again, funny the first time, but seeing it repeated over and over again is not.

The other big problem which prevents Schlig from reaching higher grounds is the technical implementation. Although the game has had four testers and even already got updated in the course of the competition, there is still quite a number of noticable technical issues. The amount of extra (unnecessary) line breaks, for instance – what's up with that? Sometimes, objects are disappearing from the players inventory when there is no reason for them to and sometimes, they don't disappear even though they should. Missing or inappropriate parser replies keep appearing as well from time to time.

Overall, prospective players don't really need to worry too much; the game is well implemented (the complicated eye logic is working flawlessly) and perfectly playable. It looks like the work of a thorough and talented implementor who simply ran out of time, leaving too little time for bug hunting. And as we all know, getting the final 10% right takes just as long as the previous 90%... 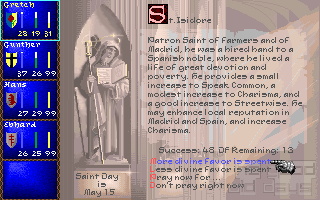