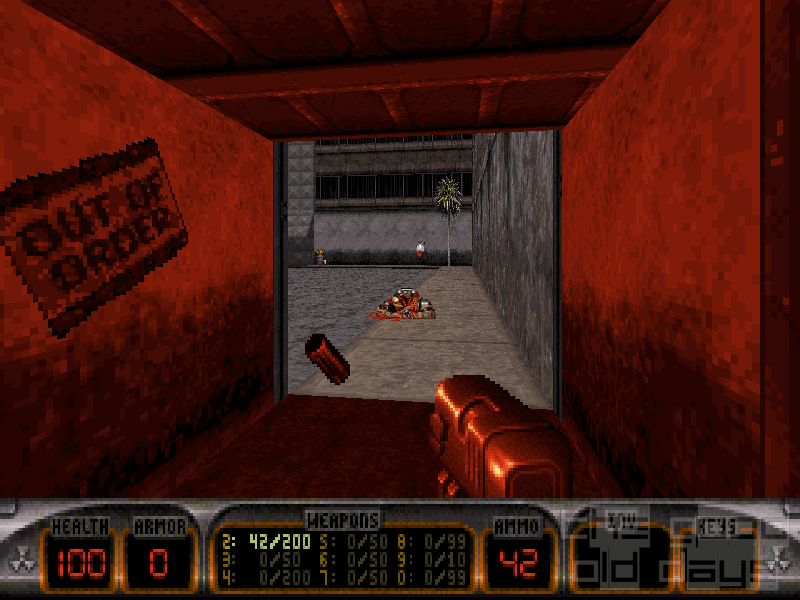 There are many kinds of FPS shooters with many of them being all serious. Duke Nukem 3D inverts all of that by giving you over the top weapons, an Sci-Fi plot and a lot of references to pop-culture along side mature humor and funny one liners. Duke Nukem 3D does alot of things that many other FPS's don't do and were about to find out why.

On the surface, Duke Nukem 3D looks like your average Doom clone. However, the similarities stop right here as we get to the weapons. Duke Nukem 3D offers a pistol (though it now requires reloading and it fires a couple of bullets at a time), shotgun, chaingun and RPG just like Doom, However Duke Nukem 3D also has unique weapons to set it apart such as pipe bombs which detonate when you want them too, a shrinkray which can shrink enemies down to toy size for a few seconds where you can then squish them, a freezer which can turn your enemies into ice for a few seconds also while doing alot of damage, laser trip mines that you can place on walls, and finally the Devastator, which fires alot of missiles at your enemies and is great for taking out a bunch of aliens. When you gib an enemy with any of the explosive weapons, Duke will probably utter one of his one liners which never gets old. (Though you can turn that off if you find it annoying.)

There's also platform jumping in certain spots and you have the ability to jump and crouch down and while you collect key cards like in Doom, you also have a bunch of powerups that you can pickup. Unlike the powerups in Doom, you don't use them immediately when you pick them up (minus the normal health bottles and armor pickups), but instead store them in your inventory so that you can choose when to use them and the powerups and pickups are pretty cool. Along with the standard health and armor pickups, you got a medkit which carries 100% worth health to heal yourself, atoms that make your health go beyond the 100% limit up to 200%, steroids which give you a brief speed boost, nightvision goggles to see in the dark, Holodukes to display a hologram of yourself to distract the aliens, and of course, the jetpack, which is perhaps the coolest and best pickup ever in a video game, and let's not forget the scuba kit which allows Duke to breathe underwater.

The environment is very interactive with mirrors you can use to admire yourself, pool tables to play, destructible objects and glass, lightswitches you can turn on and off and of course, paying strippers to take their tops off thus showing you the goods. A lot of the interactivity helps make Duke Nukem 3D stand out from all of the other FPS's and combined with the weapons, the enemies, and the awesome levels help make Duke Nukem 3D the best FPS of all time.

A lot of Duke Nukem's one liners are pretty epic and sometimes funny. When you get to certain areas, he'll usually make a quote and sometimes he even quotes other movies such as Army of Darkness. The sound effects are also pretty creative and they did a good job in the sound department especially with the sound engine coded in which allows for a lot of sounds to play at once and with echo effects being used in appropriate spots.

Although the music is MIDI, this is without a doubt the best MIDI soundtrack to ever grace any DOS game. All the music is well done and is composed to be awesome. If your playing on real hardware, I recommend getting either a Gravis Ultrasound, AWE32/64, or better yet, a SC-88/SC-55 to play the music as the OPL2 Soundtrack doesn't do the game justice.

Duke Nukem 3D runs off the Build Engine which was coded by Ken Silverman and although it was blown away by Quake a few months later, the game had some of the best graphics ever for a 2.5D game, the textures are realistic and the sprites for the aliens and weapons are very well made. The level designs are also very excellent in the graphics department with every texture being perfect and the sprites being aligned perfectly in every way possiable. Although the game runs at 320x200 by default, you can run it at 320x400, 640x480, and 800x600 which allows for greater detail.

Duke Nukem 3D was and still is one of the best 90s shooters to ever come out. It had everything that gamers wanted and so much more. Granted, some people might be offended by the violent and sexual content in Duke Nukem 3D but if you don't mind all of that, then it's a game that your gonna enjoy for a very long time.

When Duke Nukem 3D was first released back in 1996, it took the video game industry by storm. At the time of its release, it was rare to find any game that had any sort of mature content, which in modern times is now commonplace, it followed the trails of the success of Doom, which saw Duke Nukem deviate away from its platforming roots to a much mature and darker first person shooter. The game takes place after the events of Duke Nukem II, where Duke returns from space and finds Earth overrun by aliens that are hell-bent on abducting all of Earth’s women and it’s up to Duke to save the day.

The game gives you choice of a total of 11 weapons to choose from and is composed of 4 episodes; the first episode has only six levels while the other three episodes have eleven each. The fourth episode is only available in the Atomic Edition, the original can be upgraded to the Atomic Edition by installing the Plutonium Pak which was offered as an upgrade CD. This seemed unfair to many people who bought the original release as id Software at the time would offer free patches to upgrade their games (Doom and Heretic) to include the newer episodes.

I still remember purchasing this game around the time it was released, I already had the shareware versions of the first two Duke Nukem titles and was surprised to find that the CD had the registered versions of those games included as an unadvertised bonus. The game was mind blowing at the time, the graphics far surpassed most games of its era, my old 486 almost struggled running it but was still playable. It featured excellent level designs and also the ability to jump which was notably absent from other first person shooters such as Doom. Duke Nukem 3D is still regarded today as one of the best first person shooters of all time, if for some reason you haven’t played the game then the only thing I can say is “What are you waiting for, Christmas?”

I bought Duke3D when it was released in 1996 and it remains a personal favorite of mine. In fact, I still use the mousepad that came with the game. The game CD included the full versions of Duke Nukum and Duke Nukem II, which are also great games.

3DRealms gave us Duke at a time when pretty graphics was only part of what made a game great. The most important part of a great game was to have fun. Not to compete with other players, or earn achievements, or grinding through content for gear ... just quick and easy fun. That's what Duke is all about. Half of the fun is his corny one-liners, over-the-top weapons and gore, and massive explosions. The other half is the themes and interactive scenery of the episodes. Among the secrets throughout the game is also plenty of pop-culture easter eggs. Be warned, this game is not appropriate for young children. Duke cusses and interacts with strippers, and scattered through L.A. are posters and magazines advertising adult films.

Duke3D was an innovation as an FPS that included speech and jumping and interactive scenery. Duke3D and other Build engine games, such as Shadow Warrior and Blood, can still stand up today as great games, and in some ways they are more fun than modern games. For players who want to play in Windows and make use of powerful graphics card abilities there is the excellent eDuke32 port which adds high resolutions, 3D models and enhanced lighting effects. I used eDuke but after a while decided that, although it looks awesome, I prefer the look and feel of the original graphics and visual effects.

If you love Duke3D as much as I, you definitely want to get the three add-on episodes: Duke It Out in DC, Duke Carribbean - Life’s A Beach, and finally Duke - Nuclear Winter. 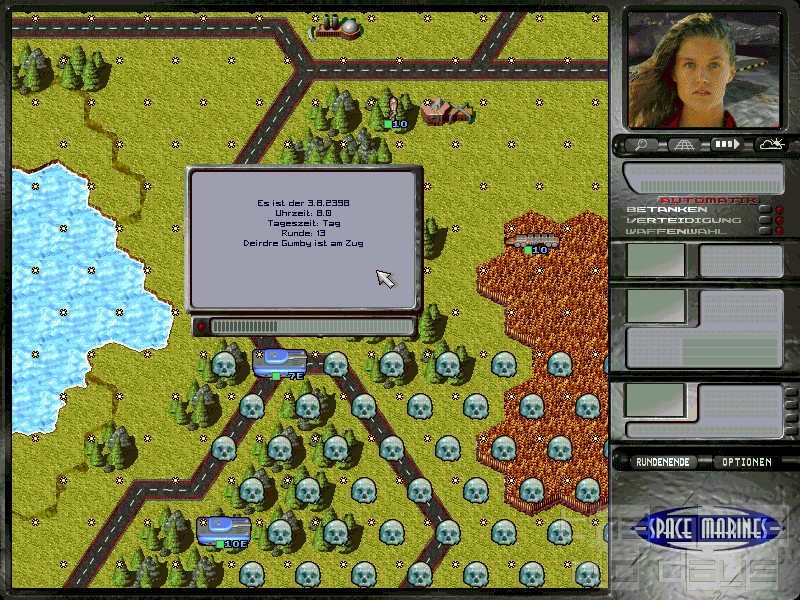