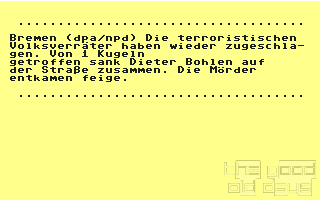 Tired of all these modern 'anti-terror' - games? Hunting evil guys of whom you have no idea what kind of evil they've done gets boring? You're fed up with working for an anonymous 'government' with more than questionable ideals? Then choose the other side: become a terrorist!

For all you non-Germans and teens who don't know what the game title stands for (no, it's not 'Royal Air Force'), I'll explain. RAF is an acronym for the 'Rote Armee Fraktion' ('Red Army Fraction'). Back in the 70s and 80s, this organization was responsible for a lot of terrorist attacks in Germany. Amongst them the murder of well-known politicians and industrialists.

As the name implies, this group fought for communism, socialism or whatever you want to call it. Obviously, they fought for a lost cause in the end, their last public appearances date back to the early 90s. The effect which can still be felt today in Germany is that several laws were passed during their active time, some of which are actually more than questionable (membership in certain leftist organisations - also peaceful ones - could get you sacked and something like that).

And this computer game - made in a time when the RAF wasn't at all history - puts you in the role of a founder of a similar terrorist organisation. One day, you just wake up and decide it's gone too far. 'The system', which you consider nothing else but a continuation of the nazi regime, can't be changed by peaceful methods! Force has to be applied!

So you come up with a sound name, buy weapons and draft members. Your ultimate goal is of course to 'bomb the state away', but I'm not sure if that can actually be achieved in the game. You can do your best to come close though.

Your job is to organise the terrorist actions commited by your group. First of all, even communists need money to finance guns, bombs, flats and so on. 'The east' is known to support groups of your kind, but only if they actually see sense in your actions (i.e. once you've murdered some people....). Robbing a bank can provide you with even more money.

Being true to your ideals, money is of course not the goal though. It's just needed for the cause. Your main subject is to assassinate well-known politicians and other prominent people who support the system! These people live in different cities and they have different levels of importance (i.e. more or less bodyguards). These shoot-outs are presented in an arcade sequence.

To avoid your organisation being crushed by the police all too soon, you should make sure you don't get caught yourself. So you send other, unimportant members. If those get caught, the evil nazi-government will force them into committing suicide, and they become martyrs - and you continue your work. To avoid that your headquarters are searched and everyone gets arrested, you can bribe several people, move houses often and carmouflage your house with army equipment (!).

Once you make some progress and your group gets more and more famous, you're 'promoted'. That means you can draft more people and thus act at more places at the same time. That goes on and on until you command an international force which has nothing to fear anymore!

Assassination targets include a lot real persons of that time. Ranging from obvious choices like Helmut Kohl (and the rest of his government) and international aequivalents like Ronald Reagan, Giscard D'Estaing or the Pope, you also have the choice to express what you've always felt for some singers (does anyone not hate Dieter Bohlen?) and so on.

Obviously, this game was not produced by any company, it was not a commercial product. Something like that would never be allowed to published! The ideals (using violence to achieve political change) carried forth in this game are not only questionable. RAF walks on the sharp edge between satire and insanity, though. It is all so exagerrated that one can hardly take all this murdering seriously. This nazi-characterization of the state is actually really hilarious! At least to me.

On the other hand, it does feature all these real people, it does present assassinations, bombing and all that stuff as a solution. Everyone should decide for him or herself if they can distinguish between reality and game enough to take all this not seriously. Consider yourself warned. One thing you should all take into account is that this game at least doesn't take itself as seriously as all this modern stuff like Delta Force ('Fight against terrorists in Afghanistan!'). Just because that is official government politics it is any better? Violent means to crush political enemies…

I've made my choice to like the game. The model of financing and logistically organising a world wide 'corporation' is really well done. The events and actions are interlinked, it's not overly complex and fussy. So even if you don't consider the game texts funny (yes, I do), you still have a good economic simulation which is lightened up with a few arcade scenes.

And in spite of playing it over months, I've not started planning coup d'états, I don't have any weapons lying around 'just in case' and even my old school's headmaster is still alive 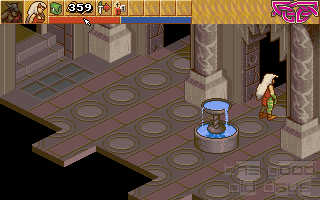