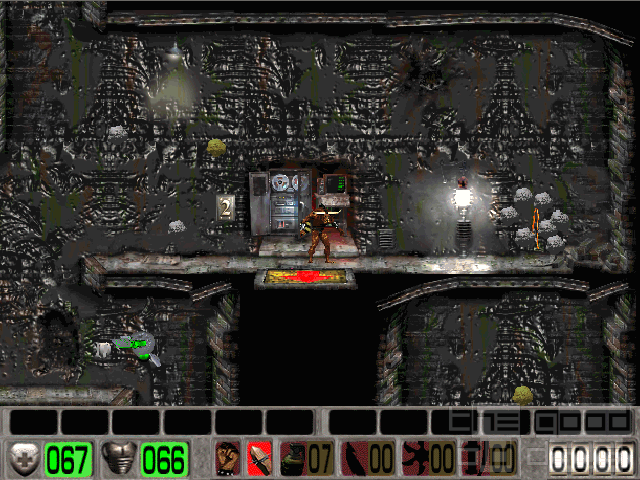 3D is just so much more immersive! With the release of Doom, the gaming world changed. Side scrollers, which had been the big thing before, which even had had whole computer systems designed just for them, suddenly looked so old-fashioned and nobody needed all those layered graphics and hardware accellerated sprites anymore. When even Mario went 3D, all seemed lost. All? No, a small group of idealists still resisted. Just surprising that, of all game producers, Sierra – the epitome of square – was part of this rebel fraction standing against the mainstream. Who would have thought?

Anyway, putting hatred for this company aside, Hunter Hunted tries its best to tackle the issue of perceived immersion by providing an impressive audiovisual experience: big, flashy explosions accompanied by appropriate sound effects, the camera automatically zooming in and out depending on the situation, atmospheric music booming from the speakers and… a voice taunting you from the off. Which hooks in with the paper thin plot about some aliens having kidnapped a human and a sort of minotaur and playing cruel survival games in the style of The Most Dangerous Game with them (probably better forgotten). 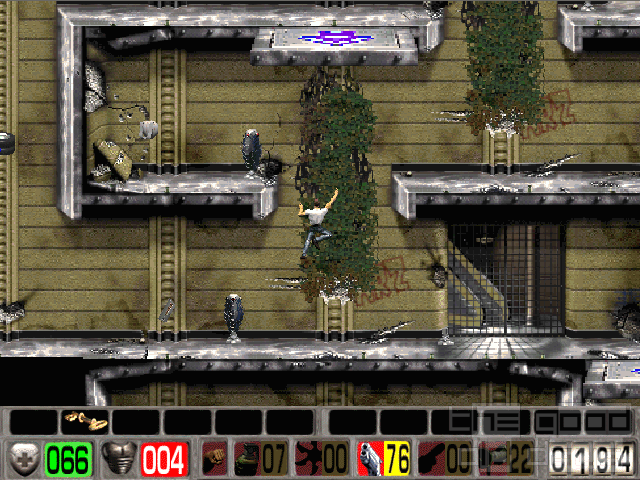 Gameplay is divided into fairly short levels. As either 'the man' or 'the beast', the objective is usually simply to reach the exit in one piece. On the way through the maze, you encounter malicious monsters (alive or robotic), tricky traps (e.g. poisonous pseudo powerups) and generally perplexing passages. Well, sometimes, there are also real powerups, like different weapons, ammunition, health or shields. Or the occasional scrap part which may be used to build an escape vehicle (oh, no, it's the silly plot again!).

Plot aside (really this time), Hunter Hunted does many things right, starting with the mentioned level size which makes consumption of the game possible during short breaks. Their design usually favours approach 'strategy' (e.g. which enemies to use the rare big guns on or from which side to approach) over trigger finger reaction time. Mazes are not too complex. New dangers, i.e. enemy types or traps, are being regularly introduced and small secrets to be found in many levels, keeping things fresh and interesting. And the two alternating protagonists, by virtue of their slightly different abilities, play sufficiently differently as well. Maybe best of all, it's impossible to get stuck. Losing a level, you can nevertheless go on and try the next one. Which may be seen as a blow to motivation by some ('Why should I even try?'), but that's certainly a tiny minority. 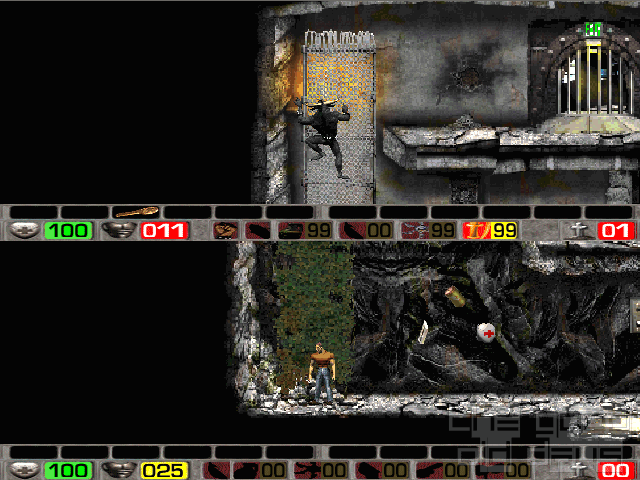 What seems like quite a wasted opportunity is that the duel aspect, which was after all important enough to make the title, is almost absent from the main part of the game. Oh, sure, there is simultanous split-screen two-player action, both in dedicated cooperative and head-to-head levels. Those almost seem like an afterthought with their distorted (!) graphics. The main single-player 'campaign' could have been spiced up significantly with tense meetings with another (computer-controlled) player. It wouldn't even have to be levels with the explicit goal of killing the other; having slightly contradictory targets or goals would have been quite sufficient. It's easy killing lots and lots of robots or ugly mutant monsters. The danger of being forced to fight with another basically innocent fellow prisoner could have made things much more thrilling.

Nevertheless: what is there doesn't need to hide. Of course, it went under in public perception between the endless stream of more and more 3D shooters. Though look at those now; how many do we still remember and, maybe even more importantly, how many of these are still seriously playable these days? Their early day technology usually makes them look clunky and unintentionally funny. Hunter Hunted comes from the other end of its own spectrum: highly stylized, perfected and tweaked at the end of its genre's heyday.

Moebius:
I still lament over the lack of this and other missed games in the glorious days of my blissful youth. Even though, this isn't exactly the good old Sierra we all used to know, i was somewhat curious about this and its other non-adventure products. Sadly, when i finally got it i realized i'm no longer interested in playing it. All in good time.
[Reply] 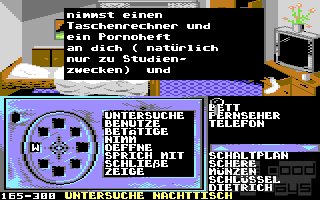