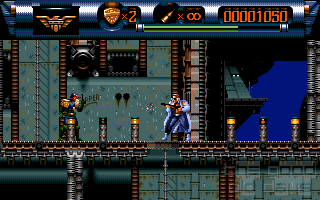 In the remote advanced morrow things are as usual out of hand. Mega City One is engulfed in corruption, violence and mayhem. The streets are potentially unsafe and menacing for innocent law-abiding citizens (are there any left really?). The police can no longer suppress the overwhelming crime wave, and so a new institution is created combining the remaining police officers and the forensic authorities into a solid law enforcement organization whose members are simply called The Judges. You are Judge Dredd, the roughest toughest kid on the block authorized to promptly arrest or execute perpetrators on sight. Your job is to serve the law, keep the city clean and abolish crime one way or the other.

Judge Dredd is a futuristic side-scrolling action platformer based on the famous sci-fi cyberpunk movie starring Silvester Stallone, which also borrows its character from the british comic magazine 2000 AD first issued in 1977. It follows the movie script roughly but is also augmented with some extra supernatural episodes featuring sinister Dark Judges who represent the criminal underworld and are derived entirely from comic. The game was ported to a number of platforms, where PC version seems to be the closest to SEGA graphically speaking, but is tangibly superior audio wise. For some reason this game never became much popular, presumably due to overused generic design which by 1996 was no longer trendy and amidst blockbusters like Flashback, Black Thorne or Abuse Judge Dredd was like a cheap copycat and unwanted child.

Beginning with some really lousy stuff. The game intro is too damn slow and you can't fast forward it either. Boo. To quit or restart the game you must first put it on pause and then press ESC, which is like another clever game of “Guess How To”. BOO! And final devastating blow to your intelligence: you can't customize the keys directly in the game, instead you must either pick a ready key set ranging from 1 to 8 in the menu (none of which suited me personally) or quit the game, go to DAT2 directory and manually edit any of the KEYSX.DAT files using decimal codes in a specific vertical order. Well ain't that brilliant! I mean, seriously, guys, you've gone so far with this product and you couldn't implement a proper key customization?! I'm petrified.

Moving on. Dredd can walk, run, jump, climb, squat, crawl, shoot various weapons and attack enemies with bare hands when close enough, which though annoyed me more than it was ever helpful. On each level you have primary and secondary missions which may take you to locate and: eliminate all enemies of a specific kind, disable devices/operate gates using terminals, rescue captives, collect items and destroy objects. Solving primary mission enables you to leave the level through EXIT door, while secondary is merely for bonus, which is still a good sport. You are armed with the “Lawgiver” gun, the only inexhaustible weapon in your possession. The rest are grenades, rockets, heat-seeking missiles and other things you may have to replenish from time to time. You can save your progress only every once you complete about 3 levels, which proved to be fair as it contributes immensely to thrill while keeping the game difficulty at decent levels.

Your enemies are plenty in number and class. Some can be arrested and sent to prison, which is another way to get bonus, while others will never comply and are to be sentenced on the spot (terminated). What particularly annoyed me is that you can't kill someone quickly with rapid fire. Each time you hit your target once it becomes briefly immune to your attacks and 2-3 of your shots are simply wasted. Some of your enemies can only be destroyed with 1 or 2 kinds of weapons, and if all out of it you can only avoid them. All the information on various enemies known simply as “perps” in this game can be acquired from terminals set all around, which additionally give heads up on your current progress and all bosses that you are yet to face.

Speaking of bosses, I was surprised to discover that they don't really meet your expectations. I assumed they should get tougher as I you get farther in the game, but that however wasn't the case. According to my experience, the most badass dudes are Zed (1st level) and Mean Machine (3rd level), which are nearly impossible to beat without losing at least one life, whereas others are a piece of cake notwithstanding frightful names and descriptions, including the Dark Judges themselves. Not sure if it's simply a failed computation on the part of developers or perhaps a subtle psychological trap to provoke premature anxiety in a player with subsequent vulnerability.

Overall, I think this game is a little too depreciated. Despite a few aforelisted issues and seeming lack of originality it still offers a handful of good treats like colourful and detailed backgrounds, fluid animation, decent length and swell dynamics. Furthermore, it's not at all empty of challenge which embodies good aiming, reaction and some mapping skills. It's not too difficult, but not too easy either. I personally like it better than Hunter Hunted, which put me off after an hour of playing, or even Black Thorne which seriously gets boring and repetitive after completing 5 levels. I think the only problem with this game here is that it came out a little too late.

Now, running this game in DOSBox may be less trivial than expected as it brings up 2 issues at a time. Another small but possibly valid reason why this game has remained obscure for so long. First, there seems to be a misunderstanding on part of game as to extended memory, so unless you do some tweaking it won't run at all. Therefore add the following in the [autoexec] section of dosbox-0.74.conf:

Second, you need to set a fixed number of cycles, cause the game will most strangely drop the speed beginning with level 2. To fix that add the following to [cpu] section (50000 seems to be the optimal parameter, but you may specify your own):

There, all set and ready to go.

Moebius:
True. People were mostly hooked on strategies and 3d shooters. Moreover, this game came out as full CD, which in 1996 was a norm, floppies were left behind. But the ridiculous fact is that most of CD space was taken by soundtracks (which are kinda annoying anyway), i played the CD-Rip with no music), while the game itself is 20mb only! A typical case when full CD is perfectly unjustified.
Mr Creosote:
Too late indeed. I mean, who was still playing side-scrollers in 1996?
Moebius:
Feel free to share anything about Judge Dredd (1996) here!
[Reply] 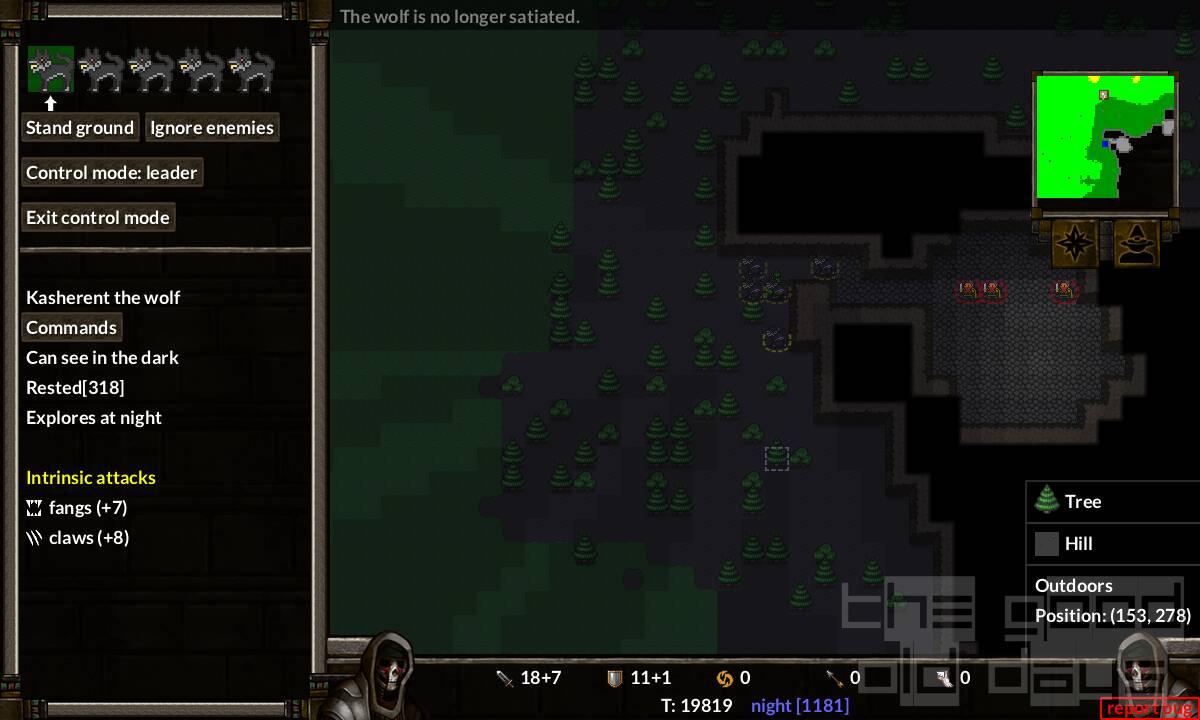