Biker Mice From Mars
for SNES 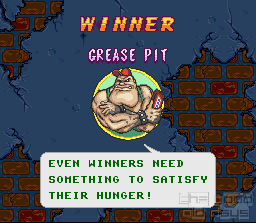 Concerning its concept, Biker Mice From Mars straightfowardly had the successful classic Rock'n'Roll Racing in mind. Unlike the original, you drive motor cycles and other unorthodox vehicles around more or less well-built tracks here. Although the game produced by Konami labels itself as being “powered by Snickers”, you permanently suppose that the programmers wanted to make fun of this ridiculous piece of chocolate-peanut-mush.

First you choose a character including his vehicle, which attributes seem advantageous to you. To make a long story short: You will always end up deciding for a vehicle with average powers that is passable at speed and acceleration as well as at grip qualities. Thereupon you either compete in tournament or battle mode. Besides the pretty easy to learn driving skills, a good dexterity with the gun is necessary in order to use it effectively. Once hit by the must of fire, the opponent will find himself lying on the asphalt. On other tracks, he lands on different ground according to the external circumstances of course, for instance the golden sand of the beach level.

On the one hand, after a succesful race, you are rewarded with points that might finally help you to be promoted to a higher league. On the other hand, you get a certain amount of money accoding to your ranking, which can be brought back into business cycle by visiting a general store. There you can electively have the components of your vehicle improved, or you can purchase a Snickers for $ 2500 (!!!). Why that? Did they prognose a galloping inflation when the game was made? Are such imaginations of a sweet-producing company supposed to raise this sticky thing's esteem? A state of doubt remains.

Considering product positioning and target group, some further gaffes are about to happen soon. The Snickers advertisement posters occasionally hanging next to the track are exclusively situated in evil, rubbish sorroundings where they will act as chow for the burning ghetto barrel at best. In addition, the praised product is consumed by appropriate costumers as well. The same venturous guys who threaten other road users with atomic ammunition and run them over finally, enjoy eating a brown-red-blue-white accumulation of pixels after the race. It's not clearly visible if this is meant to be a Snickers.

Altogether, Biker Mice From Mars turns out to be exactly what friends of consumption criticism are waiting for. The desperate attempt of a company to create an image including a way of life, incarnated by their products, fails superbly fast. At all events, after having played the game, I don't think of motor cycles and war in the streets when I see a piece of chocolate welded together in brown plastic, but of prude backbenchers in the marketing department who cause awkward advertising campaigns while steadily fearing to lose their employment. We don't have to thank these guys that it has become a passable game this time.

Cypherswipe (2009-07-19):
I found this game entertaining for a while,but it's not one that can hold a player's interest for long. Even less if you're not a fan of the biker mice.
[Reply] 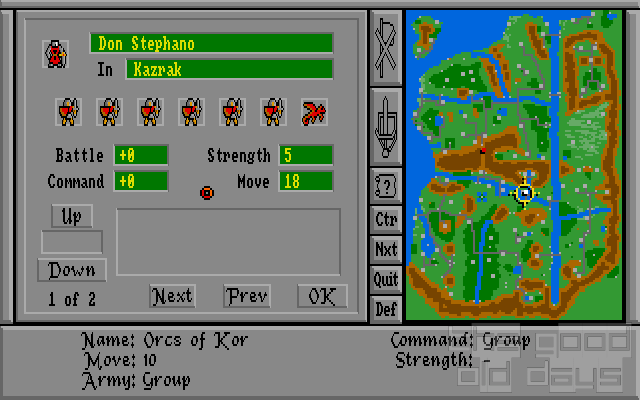