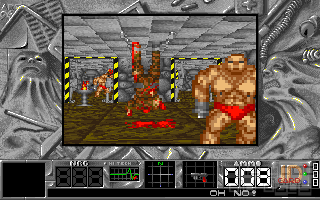 Part of the first wave of 3D shooters on the Amiga, Citadel came from the same publisher as Behind the Iron Gate, which raised some eyebrows concerning the fairly big difference between the two. Indeed, the games came from different teams and were developed in parallel. So in case you've played the other game, don't worry – the same weaknesses aren't applicable to this one at all.

In fact, unlike the earlier released game, Citadel is a much more conventional game in Wolfenstein 3D style. Complete with all the early-genre restrictions: no height levels, automatic vertical aiming, horizontal aiming fully linked to movement direction…

Which is not such a bad thing to begin with, as limitation can indeed help to focus and do those things right. Which describes the game not too badly, actually. Levels are appropriately mazey, but not too badly and the automap proves very useful. Enemies are dangerous, but not overwhelmingly so. Eight different weapons offer some variety, although in all honesty, these are pretty much different only in their damage potential.

Graphics look decent and design changes every couple of levels. They work somewhat fast enough on an A1200 class machine (don't try on an A500, although it will work in theory), but movement isn't very smooth. Ironically, faster machines don't improve this much, which doesn't shed too good a light on the capabilities of the underlying engine.

So overall, it should still be a pretty good game, right? Close, so close… if only they hadn't made one bad design decision. Ironically it is the one single decision which differentiates this game from the competition. Something which nobody else did. Hm, if nobody else did it, it is either an ingenious, revolutionary idea or a really rotten one. Which one will it be?

There isn't much guessing, surely. Thing is, you lose life energy whenever you run into an obstacle. Think about how often you bump into a wall or an opening, but not yet completely open door in such a game. Right, this is really an issue. It makes Citadel much harder, and all for reasons of pure frustration. Making a standard game by the numbers would have improved things significantly.