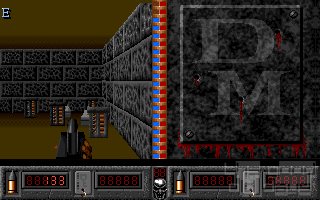 When you can't quite manage the technological breakthrough you're aiming at, give up… or go for the next best thing. In the latter case, prepare to be mocked if the “next best thing” really isn't all that impressive. So yes, this is going to happen in the following paragraphs, so you basically already know the review's conclusion, don't you?

Death Mask tries to be a Doom clone, when effectively, still none existed on the Amiga. It runs both in ECS or AGA modes and is quite fast at it, too. In full-screen mode, no less. Sort of. Actually, only roughly half of the screen is used, as even in single-player mode, the split-screen remains (Lotus style). Nevertheless, not bad considering that even later games were usually only able to smoothly display their 3D graphics in a reduced window size of similar proportions.

Here is the catch. Death Mask does not allow free 360° movement. OK, OK, on an output surface based on discrete pixels, completely “free” movement is never possible, granted. Though this game does not even come close! Do you remember how Dungeon Master moves its surroundings? Reminder: in big steps and with 90° turns. Death Mask retains the turning approach and doubles the resolution of steps. Wow! A whole two steps per corridor!

Which may actually make matters worse. Remember we're talking about the action genre here, not a slow-paced role-playing game. Quick movement to the exact same location and alignment is essential. Introducing an imbalance in the reach of steps vs. turning destroys the inherent logic which the classic step-wise movement scheme has. While not even remotely gaining the impression of fluid movement. On the other hand, this change was essentially necessary. Think about it. Early 3D shooters had no aiming on the vertical axis. If your horizontal movement were restricted to classic steps and 90° turns, your shots would never miss.

All the other things on top, like the strange choice of using “regular” people in contemporary clothing as enemies in a game set inside dungeons, or them moving so jerkily that it's way beyond the border of ridiculous, or the rather bland level layout don't really matter anymore.

We're facing a conceptual issue here. This genre simply cannot work with such a movement scheme one way or the other! The “next best thing” is not “good enough” in this case, but honestly worthless. When the “real” 360° 3D shooters finally hit the Amiga some months later, each of them may have had their very own issues, but at least they could be taken seriously on a fundamental basis. 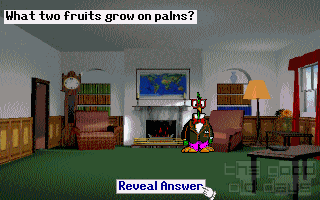