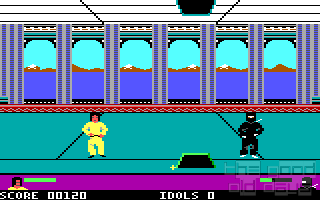 We know ninjas are mostly bad guys (especially black ones), but imagine if you were a good one? I bet you'd want to save some princess from one of those ubiquitous miscreants, right? Deal! Princess Di-Di (really now?) has been kidnapped by evil Akuma (wait, didn't you annihilate that bully back in Karateka?!) who locked her up in the fortress and set up guards around the place. Your task is to break through Akuma's security and follow the Princess' trail into the fortress by collecting 7 idols, which she mindfully dropped to help her liberator. Deja Vu anyone?

Ok, now that you have got this far you can forget that poor excuse for an anecdote because there is no Princess Di-Di or Akuma anywhere in this game. Must've been a silly prank or “clever” advertisement stratagem. Your only true objective here is to collect all 7 idols while exterminating everyone on your way and simply return back to where you started. Sounds extremely romantic, doesn't it? Correct, this is just another virtually plotless game with exceptionally primitive and dull gameplay. What more would you expect from a product named simply Ninja?

Ninja is an early martial arts flip screen beat-em-up game. Incidentally, it came out 2 years later after original Apple II release of Karateka. Being a crying copycat of the latter it was ported to several major platforms including the arcade, which, at the end of the day, was not an indicator of quality at all. While it looked a little more mature on Amiga, Atari ST and Arcadia System, particularly with regards to audio and graphics, the gameplay and general premise remained unchanged. I guess that was enough to call these ports Ninja Mission.

The protagonist ninja can attack enemies “karate”-style, by hurling shurikens and daggers at them or with his sword. Your enemies are thugs, karatekas and other ninjas who are traditionally your multicolored and multiheaded copies sharing the same exact abilities except only other ninjas can attack you with a sword. As opposed to Karateka here you don't advance only west-west, but also move up and down between fortress levels through manholes. A novelty I guess, but hardly fetching. As expected, collecting idols will also restore your stamina. Enemies per screen multiply as you come nearer to the top-most level, which is Akuma's Chamber. No Akuma here, sorry. He must've left the building prudently. No Princess either. With that kind of a name she probably never even existed, right?

Game's difficulty is a trifle. If Karateka was a little too challenging, then this is a little too forgiving. Sprites look tad better than stick figures drawn in MS Paint by a 5-year old. I understand this is only 1986, but, seriously, they could've invested a little more effort in it. Animation overall is not half bad as one would expect from a cheap game. In fact, it's pretty smooth, but a few frames here and there seem to be missing or are altogether wrong, especially in the non-combat walking sequence. Doesn't look like normal person's walk to me or ninja's for that matter, more like a crippled person's crutch walk only without crutches. Finally, even though this game is pretty easy, it is still frustrating to see your enemies re-spawn every time you move between floors. Why don't they just stay dead for Christ sake?

So, why did I even bother reviewing this? Well, for starters, I'm actually a big fan of ninja culture, so as bad as this game may seem it is still worth my evaluation. Secondly, I first saw this as a kid in the “arcade” in the early 90s. It was a self-made machine with a TV placed inside which looked pretty much like this. I believe it was running the DOS version as I do recall the good old CGA palette which even then struck me as a little unconventional. Nonetheless, at the time this game seemed to have a lot more potential, which could explain mixed feelings on my part.

Surely, nowadays it could be rated as antiquated and cheesy at best, which, incidentally, would align it quality-wise with the myriad of Z-grade ninja movies produced by Godfrey Ho in the 80's (oh, those were the days!). However, in spite of all deficiencies I don't really want to call it bad. I think “childish” would be a more appropriate adjective as well as merciful towards my juvenile sentiments.

How to enable 16-color mode in DOSBox

Open dosbox configuration file and replace machine=svga_s3 (or whatever parameter it is) with machine=tandy. Make sure you run NINJA.BAT file. Enjoy!

Moebius:
I didn't really want to include this in the review, but Akuma is present as the boss on the Arcadia System. Guess only that had enough memory for him. Still no Princess, though 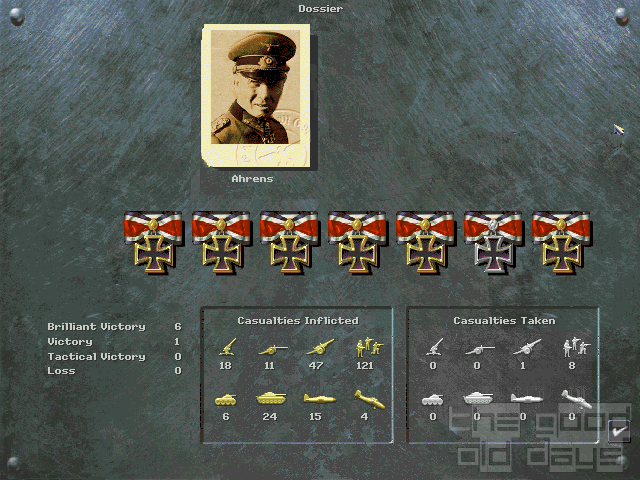